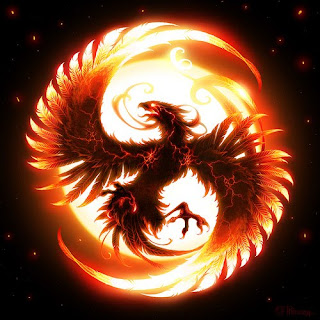 Today I have felt compelled to write about the phoenix, it is not something that I have ever really been drawn too, but I am hoping that as I write the meaning will become clear to me.

It represents our mortality, the very foundation of our being. A Phoenix represents the never-ending cycle of life; our own and of the universe itself. It is life, death and rebirth.

In ancient Greek and Egyptian mythology, it is associated with the Sun Gods Apollo and Ra. The Greeks it seems adopted the phoenix from the Egyptians, first using the term for the bird, bennu and then adapting their word for the colour crimson and the name of a city Phoenicia into the name phoenix for the bird. According to the Greeks, the bird lived in Arabia, near a cool well.

Every morning at dawn, the Sun God stopped his chariot to listen to the bird sing a beautiful song while it bathed in the water spilled from the well. Unexplained why, only one phoenix existed at any one time. When the bird feels its death is near, every 500 to 1,461 years, it builds a nest of aromatic wood and sets it on fire. The bird then is then consumed by the flames. A new phoenix springs forth from the fire ashes. It embalms the ashes of its predecessor in an egg of myrrh and flies with it to Heliopolis, "city of the sun," where the egg is deposited on the altar of the sun god. In Egypt, it was usually depicted as a heron, but in the classic literature as a peacock or an eagle.

Both the Egyptians and the Greeks believed that this fabulous bird lived in Heliopolis, The City of the Sun, and that at the end of its very long life - 500 to 1500 years, the phoenix, is said to build a nest of cinnamon sticks, and light them on fire; consequently, both the nest and the bird burn to ashes. 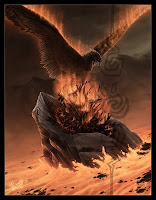 A new baby phoenix rises from these ashes, and embalms and stores the ashes of the old phoenix in an egg of myrrh. This egg is then deposited in the city of Heliopolis. The phoenix can also regenerate parts of its body when wounded, further continuing the properties of regeneration and rebirth. The Egyptians closely associated the phoenix with fire and the sun, and he was often seen with the sun god Ra.

Ovid tells the story of the Phoenix as follows: "Most beings spring from other individuals; but there is a certain kind which reproduces itself. The Assyrians call it the Phoenix. It does not live on fruit or flowers, but on frankincense and odoriferous gums. When it has lived five hundred years, it builds itself a nest in the branches of an oak, or on the top of a palm tree. In this it collects cinnamon, and spikenard, and myrrh, and of these materials builds a pile on which it deposits itself, and dying, breathes out its last breath amidst odors. From the body of the parent bird, a young Phoenix issues forth, destined to live as along a life as its predecessor. When this has grown up and gained sufficient strength, it lifts its nest from the tree (its own cradle and its parent's sepulchre), and carries it to the city of Heliopolis in Egypt, and deposits it in the temple of the Sun." Such is the account given by the poet.

The only thing scholars seem to agree on is, as Socrates once said, we know only that we know nothing when it comes right down to it. In every version of the legend, the bird is immortal.

Immortality is a central concept of all mythology, to the most ancient times. The Phoenix is the most enigmatic legend of all.

So maybe I feel a connection to the phoenix because Spring is not too far around the corner, and in spring the Earth is re-born just as the phoenix is.