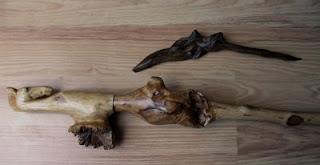 I had the most amazing day on Saturday, spent with very dear friends. I received two very special gifts - a yew wand and the most beautiful beech & hazel staff. I was overwhelmed with both gifts, truly.

I haven't worked with Yew before, so I have looked up some references to it:

Yew is often named among the most ancient trees in the world and, according to some sources, may as well be the oldest-living one. This wood holds a key to the mystery of Creation; thus, the importance of Yew cannot be underestimated. Not without reason Yew, not Ash, is sometimes thought to be the original 'World-tree' of Scandinavian mythology.

Yew forests were once common in France and Germany. The wood of the English Yew was used for bows by Celtic and Teutonic warriors, a practice which eventually led to the demise of the great Yew forests of Western Europe. In Teutonic areas the Yew had important symbolic significance. A judge's staff was made of its wood and Yew was planted in graveyards as a form of protection from malevolent spirits. Its needles were also used in rituals to communicate with the dead. In the Celtic past the tribal elders and leaders were buried under Yews in the belief that the tree would keep their knowledge and wisdom available for the future use of the tribe.

This tree is known as the death tree almost in all European countries. Yew is very poisonous. It contains the dangerous alkaloid which can invoke hallucinations and even cause death. However, the 'death', personified by Yew, must be seen not as 'elimination', but rather as 'transformation', as gaining the new quality, or as a passage to another world. Due to that fact, Yew has a strong association with Life as well as with Death. The symbolical vitality of this tree is emphasized by some of its physical characteristics: the Yew tree's branches grow into the ground; and when the central trunk dies, the tree lives on.

It is very powerful tree with deep, complicated symbolism; and as such has a wide range of possible uses, especially in all workings dealing with the essential transformation. In addition to that, it can induce visions, protect from aggression, enhance magickal and psychic abilities, etc. Yew, as the tree of Creation, symbolizes not Death, but Love.

Keywords: Essential transformation, striving for life, rebirth, mystery of life, ancestry through the blood, connection with the past, darkness, chaos, power, poisonous aggression, pain, suffering, illusion, death, destruction. The main principle of created Universe and Love as the main cause of Creation.

Magickal uses: The Yew represents direct contact with our past, and the old wisdom which we find deep within ourselves. It also speaks to us of fresh growth arising out of death, perhaps of our old selves, or old ways of thinking. It is a wonderful wood for runes or ogham sticks and can be used for contact with ancestors.