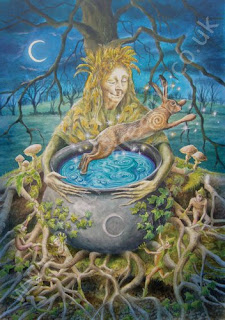 
During the reign of Arthur in the Penllyn region a man named Tegid Foel and his wife Cerridwen had a beautiful daughter Creirwy and a son Morfran, he was extremely ugly and hideous and was also known as Afagddu. To compensate for the looks of her son, Cerridwen who was skilled in witchcraft and sourcery decided to make a potion in her cauldron of inspiration to give her son clear sight, poetic majesty and knowledge of the future. The potion took a year and a day to brew, so Cerridwen appointed a blind mad, Morda to tend the fire and Gwion Bach to stir the brew. The potion was called greal and was made from six different plants.


When the brew was ready Cerridwen put Morfan next to it and went herself for a sleep. By this time Gwion was extremely tired. Morfan got in his shadow so Gwion pushed him out of the way, as he did so three drops of the brew spilt from the cauldron onto Gwion’s finger. It was hot so Gwion instinctively put his finger in his mouth and immediately gained the knowledge of all things and the remainder of the brew in the cauldron was changed to poison, the cauldron then burst. It spilled into a river and the horses of Gwyddon Garahir were poisoned by the water.

On hearing the cauldron burst Cerridwen awoke. Now he had the powers provided by the potion, Gwion immediately saw the dangers that would befall him so he fled to his own lands to hide from Cerridwen. She fell into a rage when she saw what had happened and chased after Gwion. He used his new powers and changed into a hare, Cerridwen changed into a greyhound and followed him. Just as she was about to catch him, he changed into a fish and slipped into a river. Cerridwen became an otter and chased him. Once again just as he was about to be caught he changed into a bird and flew up into the sky. Only to find that Cerridwen had changed into a hawk. Gwion suddently noticed a pile of wheat below him and changed into a tiny grain, dropping into the pile. Cerridwen spotted what he had done and took the form of a black hen, she pecked all the grain until she found and ate the grain that was Gwion. They tiny seed took root within her womb and began to grow. When the day came that Gwion was born to her, she placed him in a leather sack and threw him into the river, this was two days before the first of May.

The name Cerridwen may be based on the roots ‘caru’ – to love, ‘cerdd’ – poem or song. The term ‘wen’ literally means white, but in the names of the deities it usually means ‘sacred’. So her name probably means Blessed Poet or Blessed of the Verse. She is the guardian of the cauldron of inspiration and the awen-muse. She is the Welsh grain and nature goddess. She is also the grail queen of Arthurian legend.

Cerridwen is sometimes called ‘the old one’, she is a lunar deity, master magician and a herbalist. She favours the shape of a woman or a great white sow. She is linked with the Roman Diana and Hecate. She is a triple goddess. She is the goddess of dark prophetic powers. She is the waning moon or the Crone of Wisdom. She is the Great Mother, Druid Arwen Initiation Mother, primal landscape God consort. Called the White Lady of Inspiration and Death. Her cauldron contains Awen, meaning the divine spirit.

The symbolism of the story is that of the cycle of life – death and rebirth but also that of balance and opposites – day and night, male and female, summer and winter. Her persuit of Gwion symbolizes the changing seasons.

Gwion Bach later became Taliesin. He founded the Welsh Bardic craft. Following in this tradition the Welsh bards refer to themselves as Cerddorion (the sons of Cerridwen).

She brings wisdom, visions, dreams and the powers of divination. She also brings understanding and acceptance of fate, for she is the goddess of rebirth. She presides over all that has to do with deep emotions and feelings.


She is the crone aspect forming the triad with Blodeuwedd and Arianrhod. She is considered to be one of the five goddesses of Avalon.


Correspondences - pigs, cauldrons, vervain, the dark moon, hens
This is my interpretation of information found from various books and the internet.
Tansy
x

Image by Wendy Andrews - https://www.paintingdreams.co.uk/image/re-birth
Posted by Unknown at 21:33