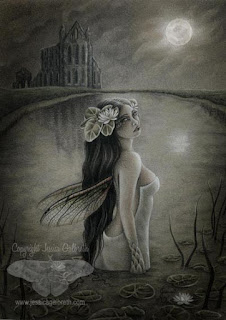 Today is National Fairy Day, take a look at www.fairyday.com. Jessica Galbreth, fairy artist, is founder of Fairy Day. Jessica's website is www.enchanted-art.com you can purchase her art from her website.

The word fairy or faerie comes from the ancient French faes, derived from the Latin fata. It was first used around the 13th or 14th century to describe spirit beings who had been central for hundreds of years in the oral folk tradition of many lands.

Faerie or fairy originally meant a state of enchantment or glamour, the power of illusion, reflecting the power of beings who might bring blessings or curses and ambivalence towards such beings. It was fear of angering the faery folk by speaking their name that led to their being given a variety of euphemisms that might, by a process of magic, attract only their benevolence.
What do you think of as faeries?

There are of course many, many races and species of faerie – as wide and diverse as ours, if not more so and quite possibly none of them have ever worn a pink tutu.

Scientists remain unconvinced about the existence of such insubstantial creatures, they cannot be pinned down long enough to be measured or tested, or to answer a questionnaire on whether they prefer acorns or buttercups.

Travellers in the modern world rarely walk across lonely moorlands with only lantern light or sleep under the stars in the shelter of ancient stones or a grove of trees and very few self respecting fae would linger on the subway late at night or frequent a neon lit service station.

But, all the possible explanations for the existence of the fae, contribute to our understanding of a spiritual force that can be sensed if not seen in places of natural beauty. It may even be that faeries are becoming more visible, as they were in pre industrial days, because we need a reminder of the consequences of a consumer society in which instant gratification has assumed undue importance.
The danger of being seduced by our own visions of faery gold and glamour. By using different faery forms as a focus for ritual, clairvoyance and psychic development we can explore different aspects of our own nature and strengthen our connections with creatures and places as a source of personal power.

Where does the realm of Faerie exist?
The Faerie realm is just that, a realm in its own right that runs alongside ours and every so often our world’s intersect. Media and literature would have us imagine all sorts of wonderful, mystical, far away places to be the land of the fae. But in actual fact faery is all around us. Nature provides us with the portals, we just need to open our inner eyes to see them.

The fae do like meeting with humans, but they are quite particular. The most important things to remember that the fae require are RESPECT and TRUST.
As witches we would never even contemplate destroying nature – because of who we are and what we believe, but what we also need to think about is that nature is where the fae hang out. To destroy their habitat or meeting places would not put you in their good books.

The fae are also famous for their sense of humour and their practical jokes, so you also need to be able to laugh with them.

If you are open with them, respect them and their habitat, honour them, show them your trust then you will be able to work with them. Most importantly NEVER COMMAND them or DEMAND anything from them, this sort of action with break all ties with them. If you would like to work with them then invite them or request their company as you would with a special friend.

The Snow Queen or Frau Holle, Holde or Dame Venus is a goddess and a Faerie Queen figure. Possibly one of the most well known Queen of the Fae is Queen Mab or Medhbh, Maeve or renamed by Shakespeare as Queen Titania. Morgan Le Fay or Morgana, Morgaine and Morgan – her name means Morgan the Faery.

Queen Oonagh or Oona or Una is the Irish Faerie Queen at the court of the Daoine Sidhe. Queen Caelia is a Celtic Queen of the Fae. Queen Argante is the Faerie Queen of Avalon and connected to Morgan le Fay.

What about the Faery King? These have been described as demoted Celtic gods who were forgotten and faded into the realms of Faerie Land. King Finvarra is a King held in high esteem and a member of the Daoine Sidhe, the race of Faerie Kings who dwell within the hollow hills of Irelnd.

He is also known as Finnbheara, Finnbarr and Fionnbhar. His father was Dagda, once known as the chief god of the Tuatha de Danaan and later a Faerie King.
King Oberon was adopted by Shakespeare to provide a faerie element in A Midsummer Nights Dream. He is however presented throughout folklore in many varying aspects, but always as a Faerie King. Gwyn ap Nudd is a Celtic ruler of fair Elfland.
King Sil or Zel who is claimed to be buried under Silbury Hill in Avebury in the UK. King Donn Fierna is an Irish Faerie King. King Midar or Midhir or Midir was once an Irish god of rebirth but now a Faerie King of the Tuatha de Danaan.

And of course, NEVER dance or partake of food and drink when on a visit to the realm of the Fae! This can lead to entrapment. Although I have heard that witches are said to be among the only mortals who may blurr these rules slightly, but it has never been tested.