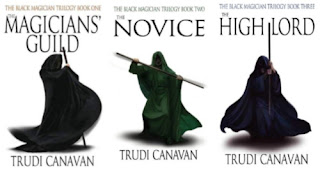 The Black Magician Trilogy by Trudi Canavan is another favourite of mine, love reading them and oh boy is there a big ole surprise in there too!

Each year the magicians of Imardin gather together to purge the city streets of vagrants, urchins and miscreants. Masters of the disciplines of magic, they know that no one can oppose them. But their protective shield is not as impenetrable as they believe.

Sonea, angry, frustrated and outraged by the treatment of her family and friends, hurls a stone at the shield, putting all her rage behind it. To the amazement of all who bear witness, the stone passes unhindered through the barrier and renders a magician unconscious.

The guild's worst fear has been realised . . . There is an untrained magician loose on the streets. She must be found before her uncontrolled powers unleash forces that will destroy both her, and the city that is her home.

Imardin is a city of dark intrigues and deadly politics, where those who wield magic wield power. Into this established order has blundered a young street-girl with extraordinary magical gifts. Adopted by the Magicians' Guild, her life is changed forever - but for better or for worse?

Sonea knew that she'd face a tough time training within the Magicians' Guild but she little realised the level of animosity she would face from her fellow novices. The sons and daughters of the most powerful families in the realm, her classmates seem determined to see her fail - at whatever cost. But in accepting the protection of the guild's high lord, Sonea may have embraced an even bleaker fate. For High Lord Akkarin harbours a secret that is far darker than his magician's robes.

In the city of Imardin, where those who wield magic wield power, a young street-girl, adopted by the Magician's Guild, finds herself at the centre of a terrible plot that may destroy the entire world . . .

Sonea has learned much at the magicians' guild and the other novices now treat her with a grudging respect. But she cannot forget what she witnessed in the High Lord's underground room - or his warning that the realm's ancient enemy is growing in power once more. As Sonea learns more, she begins to doubt her guildmaster's word. Could the truth really be as terrifying as Akkarin claims, or is he trying to trick her into assisting in some unspeakably dark scheme?

http://www.trudicanavan.com/books/the-black-magician-trilogy/
Posted by Unknown at 10:26