On the eighth day of Yule my Coven gave to me...eggnog 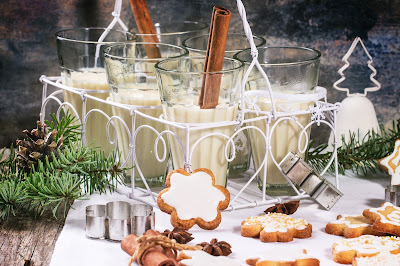 From teeny tiny quails eggs up to huge ostrich eggs they come in all sorts of shapes, the delicate outer casing containing the yolk and the white.  Boiled, scrambled, fried, poached or sunny side up…how do you like yours?

An egg is a complete neat package of life and is very symbolic of fertility, new life, new beginnings and creation itself.  Within they also symbolise long life and immortality.

Eggs were considered sacred in many cultures for centuries and a hardboiled egg was seen as magic in the Middle Ages.

Very symbolic at Ostara the egg more often in its chocolate form has become a part of spring celebrations as a representation of new life and new beginnings.

In legend faeries would consume eggs of mythical birds such as the phoenix.

Throughout history people have eaten eggs for lots of different reasons, some to absorb the magical properties by eating them, others to ensure fertility.

In the Slavonic and Germanic lands people also smeared eggs onto their hoes to ensure fertility for the soil.

In Iran brides and grooms exchange eggs for fertility.

In 17th century France, a bride would break an egg when she entered her new home for the first time.

Eggs were often used for divination.  This stemmed from the belief that eggs symbolised life and particularly life in the future.  One method involved painting the eggs, boiling them and reading the patterns in their cracks.  Another method involved tossing the eggs and divining the future, a system of divination known as oomancy.    Egg white can also be used, by dripping it into a bowl of water and reading the shapes that it makes.

In Egypt eggs were hung in the temples to bring fertility, for birth and renewal.

The Hindu description of the beginning of the world saw it as a cosmic egg.

The yolk in the centre of the egg has also been used to represent the Sun.

I have put the gender as both masculine and feminine, in Chinese culture the egg as a flavour is seen as yang which is masculine but I see the egg as very feminine because of it being literally a baby chick.

The egg is a complete set of elements in one handy pack:  The shell represents Earth, the inner membrane represents Air, the yolk is Fire and the white is Water.

Milk…comes from cows, sheep, goats and yaks…possibly some other animals but not ones that I can purchase in my local shop (although to be fair they don’t sell yak milk either).

It used to be that the milkman delivered bottles of milk to your doorstep and you got full fat and nothing else, now you can get milk in all sorts of guises from full fat deliciousness to completely skimmed which looks and tastes like water.  When I lived on a farm we used to go to the dairy and scoop out a jug of still warm milk from the tank where the cows had just been milked, it was thick and luscious and delicious and although now that would be totally against all sorts of health and safety stupidity rules.

Milk is produced by the mother to feed the infant so it carries with it beautiful nurturing energies, heap loads of feminine power and amazing goddess energy too.  It is also ruled by the Moon so you get her energy in there as well.

Brilliant for using as offerings and libations during ritual and when you are out and want to leave an offering on the ground or for a tree spirit, the faeries are partial to a drop of milk too especially if you add in a drop of honey.

Pour a libation of milk into the sea to honour the goddess Isis.  Milk is also sacred to Hathor and Zeus.

I believe milk also carries with it the magical properties of the animal that it came from.

From A Kitchen Witch's World of Magical Food