Inside The Art of Ritual... 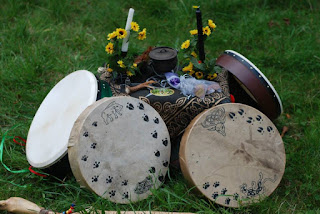 Published at the end of May The Art of Ritual was a 'with a little help from my friends' kinda book so let's take a peek inside...

Covering the ritual basics such as:

The second half of the book presents the reader with a host of rituals, some written by myself but others written by fellow coven members; Tracey Roberts, Stacey Mantle, Vanessa Armstrong, Sue Perryman, Samantha Leaver and Josh Petchey so that you get a nice variety of ritual styles.

A lot of the rituals scripts have actually been used in our Kitchen Witch open rituals so they are tried and tested.

The book has received some lovely reviews (for which I am always incredibly thankful) such as this fabulous one:

It’s perhaps one of the most satisfying books I’ve read on ritual thus far in terms of how much is covered. Patterson has thought of everything: Typical altar tools, how to prepare for ritual, working with deities, spellwork, and of course a selection of ritual scripts for the reader themselves to use.
What I found particularly impressive about The Art of Ritual was the wide range of rituals and celebrations included. In addition to the usual Wheel of the Year celebrations and handfastings, there are other rituals covered that aren’t particularly common in Pagan ritual books, such as male/female coming-of-age ceremonies, croning/sagings, and, something I’d never heard of before, Hand Partings (the Pagan equivalent of an annulment). Unashamedly eclectic, Patterson goes into rituals for a variety of different Pagan paths, including Hellenic, Celtic and Asatru. I especially liked her “Faery Ritual” for midsummer, incorporating bubbles and a lovely guided meditation; I can imagine this creating a really magical atmosphere.  Patterson writes in a chatty, laid-back style, which is somehow fitting for a Kitchen Witch.

Available from all good online stores such as Amazon, Barnes & Noble, Book Depository and Waterstones.