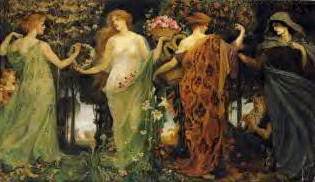 A few weeks back I put up a new profile picture on facebook, one taken at our Kitchen Witch earth ritual in October and I was overwhelmed with the lovely response from people...and then...the comment "handsome crone" appeared...and although I am pretty sure it was meant as a compliment I was a bit taken aback.  Now I realise I am no spring chicken and definitely not in the maiden category (having just passed my 47 birthday and having two school age children) but...crone?

I have always struggled with the idea of the triple goddess because I think in this day and age there is a slot missing.  I feel that the gap between mother and crone is too large and should have 'matriarch' popped in there.

But who decides at what age/stage in life you slip from one phase to another?  Is there a set time? Should there be?  I think it should be on a personal basis.

Maiden makes sense - young girls, full of life, new beginnings and possibilities and their whole life ahead of them until they get married perhaps?  But what if they don't get married?  What if they never have children?  At what stage do they reach the mother phase?

The mother phase makes sense to me because I have children but what if you don't?  Are you in the mother phase all the time you are able to bear children (whether you decide to or not)?

At 47 I don't feel ready for the crone stage and I still have school age children so does that mean I am in the mother phase or have I moved into the matriarch?  I think matriarch does feel more comfortable because I am sure as heck not a crone, I am no where near ready for that...

Matriarch fits in after the mother stage, I am peri menopause so technically I could bear children (eeek...no more thanks!) but I am past that stage of wanting babies and toddlers, my children are growing and becoming their own individual personalities and are quite capable of not needing my undying attention all the time...I have gained my own space back and can do things that I want to do without worrying about nappies and milk...

Crone to me is perhaps when you hit your late sixties or early seventies...when your children have left home, when you have maybe retired and have time to yourself to do whatever you want to, when you are full of confidence about who you are, where you have been and what you will do next...the sage, the wise woman.

There are four seasons in a year which I equate to the goddess:
Maiden is spring
Mother is summer
Matriarch is autumn
Crone is winter

I do feel I am definitely not in winter yet...autumn suits me fine for now.

And then there is the issue...why would I be worried about being called a crone?  Crone means wise woman and an elder so actually it should be given as a huge compliment but in my head and maybe because of society...it makes me think 'old' and 'wrinkled'...not that there is anything wrong with being old or wrinkled because let's face I will be at some point and I will wholeheartedly embrace it when it happens, I shall wear floppy hats and kaftans and spit at children... but I am just not ready for it yet...(although I do already wear floppy hats...).
Posted by Unknown at 09:32