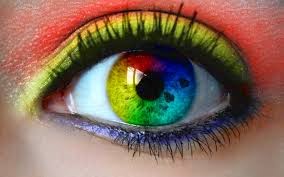 The word for today is Perception...

Not just because we have been watching the excellent series of the same name on TV starring Eric McCormack.

The dictionary says:
Perception: a belief or opinion , often held by many people and based on how things seem.
So many people make decisions based on their perception of others.

As a witch some people have the perception that I am wicked and evil.

Because I work from home some people have the perception that I sit around all day watching daytime TV (Nothing on this planet would ever make me sit and watch Jeremy Kyle...just saying...).

As a witch some people have the perception that we dance around naked in the woods at night. Seriously?  I live in the UK even during the summer the evenings get pretty nippy.

When I worked in an office and wore a suit all the time the perception of me from my image was that of a clean cut sensible woman...the perception was always dented somewhat when they saw my tattoos and found out that I was a witch, used to be a drummer in an all girl rock band, rode a motorbike and was married to a rock drummer.

And we could go into a whole heap of perceptions about body image/size/weight...but I'm not even going to go there.

We make perceptions all the time especially with how people look, what they wear, their hair colour, whether they have tattoos...the list goes on.

In my experience very little is 'as it seems', the old adage "never judge a book by it's cover" is often very true.

Let's look beyond the perceptions, many of which have been set in place by the media in one form or another.  A lot of the time we see what we think we should, what we have been told is right.

Throw away the perceptions and get to know people for who and what they really are.  They aren't all going to be wonderful but it is (in my opinion) a much better and more interesting way of finding out.