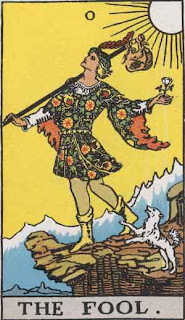 In the major arcana in a tarot set there is a backline story involving the Fool and his journey through life via each major arcana card, here is my take on it but from a slightly different perspective:

Major Arcana – The Knight at the Court of King Arthur story…

The Fool:
A young boy sets out from his home and makes his way to the court of King Arthur.  He was hoping to find work there.  He is full of excitement and anticipation, he had dreamt about all the luxury and finery of course and his imagination had run away with his ideas on what life in court would be like.  The sun was shining as he started his journey and he had not a care in the world.

The Magician:
As he reached the gates of the court he met a fellow traveller.  This man looked very learned and carried with him a few books tucked under his arm, he also had a page with him that carried a large trunk.  The man questioned the boy as to why  he was here alone.  The boy told him his reasons.  The man, who was in fact the court magician, advised the boy to behave in the presence of others, to speak only when spoken to, and to carry out any instructions that were given to him without question and he would have a good career in the court.


High Priestess:
As the boy entered the castle he made his way across the courtyard.  Crossing from the other direction was a very imposing lady followed by a group of younger ladies, they all seemed to be attending to her.  She stops in front of the boy and asks why he is here.  He tells her.  She places her hand on his head and bends down to speak to him in a quiet, soft but wise voice.  She advises him to trust in himself and his own instincts, she tells him to always take note of things around him and if he comes across a problem to look within to find the answers.

Empress:
As the boy enters court he joins the end of a line of people all waiting to seek counsel with King Arthur and Queen Guinevere.  Once he reaches the front of the line he kneels and is overwhelmed by the power they seem to command.  He is asked to state his purpose.  Once he has done so, remembering the words of those he has met so far, the Queen leans forward to speak to him.  She has a beautiful voice that puts him at ease at once.  She questions him further about his hopes and dreams, about how he sees his future ahead of him.  Once he has done so she nods pleasantly and sits back, but smiles a reassuring smile to him.

The Emperor:
Then the King leans forward, he gives the feeling of power and command. He further questions the boy about how he sees his future.  The King gives a hearty laugh and tells the boy a tale of his own childhood and the dreams he had, how hard work and focus if applied can lead everyone to achieve their desires.  He advises the boy that if he listens and learns as he does his duties he will go far.

The Hierophant:
The boy is sent to the servants quarters, on his way there he passes the chapel and almost bumps into a priest who is coming out of the doors.  The priest questions why the boy is there and the boy retells his tale so far.  The priest nods wisely and beckons the boy to sit with him outside the chapel.  The priest advises the boy to visit the chapel regularly, to keep himself and his clothes clean and smart, and to listen to those above him and to respect his fellows.  The boy thanks the priest and heads towards the servants quarters once more.


The Lovers:
The boy starts his duties as page at the court and begins to enjoy the life he has.  He remembers well all the advise that he has heard so far.  One of the commitments he has to take is to pledge allegiance to the King and his knights, this he does wholeheartedly and with each duty he performs in his daily tasks he thinks about his oath.

The Chariot:
One day some months later, a knight comes over to speak to the boy whilst his is performing his duties.  He is one of King Arthur’s knights and the boy feels a little nervous.  The knight sees this and claps the boy on the back and laughs.  He offers the boy the opportunity to become his own personal page.  The boy is more than excited and readily accepts.

Strength:
Not long after he accepts the position from the knight the boy is off on his travels with him, accompanying the knight in his battles and skirmishes.  During this time the boy has had to learn to be very patient and has had to find huge amounts of inner courage.  He has done well, and the Knight is pleased with him, the last thing the knight needs in the middle of a battle is a nervous and unorganised page!

The Hermit:
Back at the castle after a particularly damaging battle, the page is cleaning the knights armour, tending to the horse and generally tidying and sorting.  A brief thought flickers across him, he wonders why he is doing all this boring, labourious and menial work.  Just as he is thinking this an old man, bent over and walking with a staff comes over to him.  He compliments the page on his work, asks him about his duties, which the boy replies to with pride.  The old man as he departs, turns and says to the page how dedicated he is and how much the knight must rely on him and that one day it will be his turn.


Fortune:
Some months later the pages are all asked to have a small tournament.  They didn’t realise but King Arthur was watching.  Once they have finished the King steps up and chooses  a handful of pages to come forward.   The page in our story is one of those chosen.  The King asks if any of them were ready to become knights.  Before any of them can answer he reminds them of the level of commitment and the courage they will need.  Our page steps forward and requests to be made a knight.

Justice:
The page is moved into the knights quarters and begins his proper training.  It soon becomes clear to him that the responsibilities and commitment required are very great.  Now that he is a knight he has to be responsible for others, he has to make decisions that affect others too.  He does quite well at striking the balance, but like most he doesn’t always get it right, but he learns to accept the consequences.

Hanged Man:
The knight is faced with a decision, the King has asked for volunteers to go on a crusade.  It will be a long and difficult journey and the knight will be required to leave his home and his friends for a long time and there is the possibility he may not return.  The goal is for the greater good of the people but he must make the sacrifice of his comfort and lifestyle at court.

Death:
The knight has accepted the challenge of the crusade.  He takes himself from his friends, his comforts, the way of life he has become accustomed to and strikes out on his new mission.  He is no longer the young boy that first arrived at the castle with hopes and dreams.  He has to leave a lot behind as only the necessities can be taken with him, he discards that which he does  not need and only takes what is absolutely necessary to move forward on his journey.

Temperance:
Many weeks stretch into months.  The knight has had to endure much, but he has also made new comrades along the way.  The extravagances of the court have been left behind, his time is now spent working with his fellow knights towards the same goal.  He tries to balance the hectic life of a knight on a crusade with the few snatches of peace and quiet at the end of the day.


The Devil:
There have been occasions on this journey when the knight’s ego has gotten the better of him.  One or two times when his pride has been damaged and his temper has flared.  One other knight in particular seems to clash with him often.  After the initial exchange of unpleasantries and almost physical exchange the knight has learnt to curb his ego and balance it with that of humility.  He also tries to add a small amount of humour when situations get too tense.

The Tower:
One night the camp is invaded by barbarians, with no warning at all.   The horses are set free, the tents pulled down and chaos reigns.  There is shouting, horses trampling on everything, sword fights and people everywhere.  By the time the light of dawn comes, the camp is silent.

The Star:
The Knight gathers the forces that remain, they clean up the campsite and rescue as many horses as they can.  The start to re-group.  The knight begins to see that they had become unfocused, they had lost sight of their goal and purpose.  The invasion of the camp has helped him to see clearly.  He draws everyone together and speaks to them of new purpose and direction, new hope.

The Moon:
It is at this point that the knight takes some time to rest and refocus.  He dreams, he reflects, he listens to his gut instinct about what their next move should be.  He seeks and finds clarity.

The Sun:
The knight and his group set forward on a bright sunny day with new purpose and new hope in their hearts.  They head for their goal with joy and enthusiasm.  Everything is going well, everyone is healthy and fit, their plan is in place and all is perfect.

Judgement:
They arrive at the point of their crusade, decisions have to be made, the challenges have to be met but they need careful consideration.  They knight looks back on all his previous decisions and challenges.  Those that he got right and those that were mistakes,  he learnt from all of them.  He uses that knowledge now to put his plan into action.  Knowing that no matter the outcome he will know in his heart that he did his best.

The World:
Success!  The knight has the holy grail, his crusade, his hardships, his challenges, all that he worked for have come to fruition.  He has achieved exactly what he had set out to do.  He now takes the time to celebrate and then to enjoy life and its rewards.