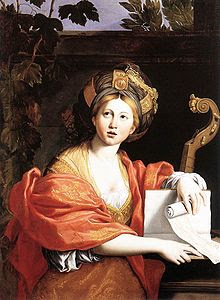 I have been researching The Sibyls - the original seeresses.

The dictionary definition of a Sibyl is:
A woman supposed to be endowed with a spirit of prophecy.
The number of the sibyls is variously stated by different authors; but the opinion of Varro, that there were ten, is generally adopted. They dwelt in various parts of Persia, Greece, and Italy.
A female fortune teller; a pythoness; a prophetess. "An old highland sibyl."

Persian Sibyl – was said to be a prophetic priestess presiding over the Apollonian Oracle, she is said to have foretold the exploits of Alexander the Great.

Libyan Sibyl – was prophetic priestess presiding over the ancient Zeus Amon oracle at the Siwa Oasis in the Western Desert of Egypt. The oracle here was consulted by Alexander after his conquest of Egypt.

Delphic Sibyl – was a legendary figure who gave prophecies in the sacred precinct of Apolloo at Delphi. The Delphic Sibyl was not the same as the Pythia, the priestess of Apollo who was also known as the Oracle of Delphi.

Cimmerian Sibyl – The Cimmerian Sibyl, by name Carmentis, was the prophetic priestess presiding over the Apollonian Oracle at Cimmerium in Italy, near Lake Avernus (i.e. Cumae).

Erythraean Sibyl – was sited at Erythrae, a town in Ionia. She is said to have predicted the Trojan War and prophesised to the Greeks who were moving against Ilium both that Troy would be destroyed and that Homer would write falsehoods.

Samian Sibyl – The Samian Sibyl was the priestess presiding over the Apollonian oracle near Hera's temple on the Isle of Samos, a Greek colony.

Cumaean Sibyl – this was the sibyl that most concerned the Romans, located near the Greek city of Naples, whom Virgil’s Aeneas consults before this descent to the lower world. It was she who supposedly sold to Tarquinius Superbus, the last king of Rome, the original Sibylline books.

Hellespontine Sibyl – or the Trojan sibyl presided over the Apollonian oracle at Dardania. The sibylline collection at Gergis was attributed to the Hellespontine Sibyl and was preserved in the temple of Apollo at Gergis. Thence it passed to Erythrae, where it became famous.

Tiburtine Sibyl – To the classical sibyls of the Greeks, the Romans added a tenth, the Tiburtine Sibyl, whose seat was the ancient Etruscan town of Tibur. An apocalyptic pseudo-prophecy exists, attributed to the Tiburtine Sibyl, written c. 380 CE, but with revisions and interpolations added at later dates. It purports to prophesy the advent of a final Emperor named Constans, vanquishing the foes of Christianity, bringing about a period of great wealth and peace, ending paganism and converting the Jews. After vanquishing Gog and Magog, the Emperor is said to resign his crown to God. This would give way to the Antichrist. Ippolito d'Este rebuilt the Villa d'Este at Tibur, the modern Tivoli, from 1550 onward, and commissioned elaborate fresco murals in the Villa that celebrate the Tiburtine Sibyl, as prophesying the birth of Christ to the classical world.

The name 'Sibylline Oracles' was given to a collection of prophecies emanating from the Sibyls, a group of divinely inspired seeresses. According to Varro (Marcus Terentius Varro (116 BC – 27 BC), also known as Varro Reatinus - a Roman scholar and writer) there were ten Sibyls: the Persian, the Libyan, the Dephian, the Cimmerian, the Erythraean, the Samarian, the Cumaean, and those of the Hellespont, of Phrygia and of Tibur.

In the second century B.C., these pagan oracles were adapted into verses by the Helenistic Jews of Alexandria to help diffuse Judaistic doctrines and teachings. This practice was adapted by the early Christians, and the sibyls are frequently quoted by the early Fathers and Christian writers, namely Justin, Athenagoras and Augustine.

As Christianity gained in strength, the purpose of the Sibyls shifted. Balancing the Old Testamant prophets who preached to the Jews, the Sibyls, with their gifts of prophecy, were assigned to assist the Gentiles. The Libyan Sibyl had prophesied the manifestation of Christ to the gentiles.

The number of Sibyls shrank to five, with each named after the nation of her mission: the Persian Sibyl for Asia, the Libyan Sibyl for Africa, the Erythraean Sibyl for Ionia, the Cumaen Sibyl for Rome and and the Delphic Sibyl for Greece. In 1509, Michelangelo included these five Sibyls as part of his decoration of the sides and ends of the Sistine Chapel ceiling.

We can identify several features common to both the primitive earth-goddess and the Sibyl's of ancient Greece; They were invariably associated with the feminine, they were connected to both serpents and doves (birds), and shared a similar set of traditions with roots leading back to the primitive worship of an ‘earth-mother’ or ‘mother-earth’, in relation to agriculture and harvest.

A method of Divination and prophecy in which gods or spirits are consulted through a human medium. In ancient Greece, the voices or mediums of the oracles were sibyls, women priests who lived in caves regarded as the shrines of deities.

An oracle was a means of making a personal request to a deity to answer a question. Evidence for the use and belief in oracles comes from the many oracular decrees engraved on temple walls or delivered on papyrus to private persons who then wore the oracle as an amulet; references made in administrative or private records; original petitions on papyrus or ostraca and laid before the god; and statues and reliefs associated with oracles.

Oracles were regularly consulted by rulers and leaders concerning matters of state and war. In addition to prophecy, advice was sought. The oracle provided illumination as to the best of several alternative courses of action.

Women served as oracles in ancient Babylonia and Egypt, but the most famous and powerful of them were the sibyls of ancient Greece and Rome. The best known oracle of this type was seated at Delphi, near the foot of Mt. Parnassus, in a temple built in the 6th century. Consulting the oracle was a privilege determined by lot. The enquirer phrased a question and waited in an outer room of the temple while the Pythia entered a lower, inner chamber and went through the ritual of trance. She sat on a tripod, gazed into a flat dish and held a laurel branch, according to ancient art. Her trance was usually frenzied. The answers were so elliptical that they had to be interpreted by priests, who rephrased them in hexameter verse.

In ancient Egypt, deities spoke primarily through oracular dreams but also through prophetesses, who were the women of important families. During the New Kingdom (1570-1342 B.C.), cult statues served as the mouthpieces for deities, primarily Amun, god of fertility, agriculture and "the breath of life." The statues were said to be able to nod and talk but probably were manipulated by priests.

A Psychic or witch who uses Psychic gifts for Divination and prophecy, sometimes in trance, is a type of oracle.