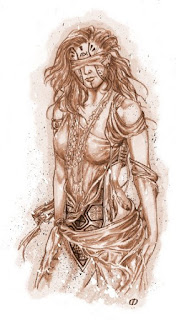 More seer research ;-) This time on the meaning to the name 'Seith':
Since humans first became conscious beings we have sought to foresee the future and make wise choices. Every culture has some kind of oracular practice, from the pythia of Delphi and the völva of the Viking Age to the nabhi of ancient Israel and the nakaza of Japan. Today, modern seers are seeking to rediscover ancient techniques and develop a practice that will serve the community as the oracles did of old.

Old Norse literature
In the Viking Age, seid had connotations of ''ergi'' ("unmanliness" or "effeminacy") for men, as its manipulative aspects ran counter to the male ideal of forthright, open behaviour. Freyja and perhaps some of the other goddesses of Norse mythology were seid practitioners, as was Odin, a fact for which he is taunted by Loki in the ''Lokasenna''.
Sagas