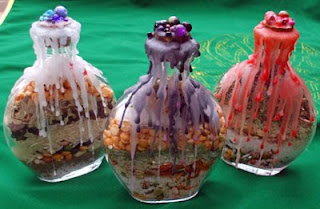 A bit of History about Witch bottles

The history of Witch-bottles goes back hundreds of years. The origins of this tradition have been dated to the 1500's. They were used most actively for a couple of hundred years. This is the same time when the Witch-hunts were going on. After this period, the tradition slowly waned. The last historical Witch-bottle was found in a cabin built in mid 19th century, in Pershore, Worcestershire (UK).

The actual bottle of a traditional Witch-bottle during the 16th and 17th century was a German stone bottle called "bartmann" or "bellermine" bottle. Similar bottles of stone material were manufactured in Holland and Belgium. The technique wasn't mastered in England before the 1660's and bartmann bottle manufacturing was rare in Britain.

The bottle got its name from a cardinal called Bellarmino only after the Witch-bottle tradition had already begun. These bottles had a round belly and they were decorated with a facial image of a grim looking bearded man and a medallion of stylized floral or natural imagery. Glass bottles were also used.

Old Witch-bottles contained things like bent iron nails, human hair and urine (you may be pleased to know my handcrafted ones do not contain hair or urine ;-)). Other traditional items contained in Witch-bottles include small bones, thorns, and needles, pieces of wood and in some cases heart-shaped pieces of cloth.

The bottles were most often found buried under the fireplace. Other sites include under the floor, buried in the ground there, and plastered inside walls. The fireplace is, from a magical point of view, a security risk as it has a straight connection with the open skies above. It was believed that the curse of a Witch or even a Witch herself in a shape-shifted form could get into a house through the fireplace. Another security risk was the doorway, as doors are opened and closed several times throughout the day. In addition to the fireplace, the bottles were often hidden near the doorway.

On the Original Uses
The most active period of Witch-bottle usage and the Witch-hunts don't coincide by accident. The fear of Witches produced ways of protecting oneself against them during times when slightest misfortune was easily interpreted as being caused by a curse put on one or another member of the family. From the point of view of a present day Witch, the original purpose for building a Witch-bottle wasn't that pleasant: they were intended to keep Witches and Witches' curses away. The contents of a Witch-bottle were designed to not only divert an attacking Witch, but also to cause her to suffer the agonies brought on by all the nasty things inside the bottle. To put it simply: to turn the curse back to the curser.

The Witch-bottle was believed to be active as long as the bottle remained hidden and unbroken. People did go through a lot of trouble in hiding their Witch-bottles. Those buried underneath fireplaces have been found only after the rest of the building has been torn down or otherwise disappeared.

Modern-Witch-Bottles
Very generally speaking, the modern day Witch-bottles are very similar to historical Witch-bottles in their basic structure, even though their intended purpose has changed. The most common purpose for constructing a Witch-bottle today is capturing negative energies targeted at the constructor of the bottle, her family or her home. Even though some bottles are "mirroring" in nature, they aren't normally built to cause agony to the sender of negative energy/caster of curses. Some Witch-bottles are intended to change negative energy into positive one and then release it into the surrounding area. This kind of bottles could be classified as "guard and protect"-bottles.

The basic structure of Witch-bottles can be used for purposes other than protective: for financial gain, for helping with artistic creativity, to call forth positive energy (instead of "just filtering out negative energy"), for improving health, etc.

Basically a Witch-bottle is a container of some sort, usually a jar or a bottle, which is filled with objects and often also liquids which fill a given magickal purpose. The person making the Witch-bottle, or in other words, the one casting the bottled spell, can charge the objects magickally beforehand and build the bottle to work on this charging until the need of renewing the spell arises. Witch-bottles can also be built to recharge themselves by the energy they 'capture' for as long as the bottle stays unbroken, whether it is years or centuries.

What Do Modern Witch-Bottles Contain?
The typical contents of the basic protective Witch-bottle today is quite similar to that of the traditional one: nails, sand or different colored sands, crystals, stones, knotted threads, herbs, spices, resin, flowers, candle wax, incense, votive candles, salt, vinegar, oil, coins, saw dust, ashes etc etc. Actually, everything used in "normal spells" can be used in this bottled version of a spell, the Witch-bottle.