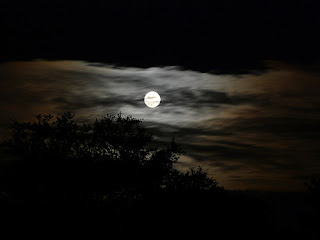 I love the sight of the full moon, it is so beautiful.

The appearance of a full moon is caused by the orbit of the moon around the Earth, and through the Earth's orbit around the sun. As the moon moves behind the Earth, so that the Earth is between it and the sun, more and more of the moon will appear illuminated in a cycle called “waxing.” When the moon is all the way behind the Earth, the sun's light will completely illuminate the visible side of the moon, making it look like a large white disc in the sky. As the moon moves around to the front of the Earth again, the visible disc shrinks, in a process referred to as waning, until the moon appears totally dark because the illuminated portion faces away from Earth.

Although the moon generally takes a little over 27 days to completely orbit the Earth, it takes another few days for the Earth, moon, and sun to be in the proper alignment to create a full moon. As a result, the lunar cycle takes around 29 days in total. Since the lunar cycle is such a present and obvious part of life, it lent its name to the word “month,” which is derived from “moon.”

Occasionally, two full moons will appear in the same calendar month. This is known as a “blue moon,” and it is quite rare. Some people consider blue moons to be highly auspicious, because of their rarity. More rarely, the month of February will have no full moon, since it is usually only 28 days long. When this happens, January or March will be marked with a blue moon. The full moon is also periodically eclipsed, thanks to its position behind the Earth. When the three planetary bodies reach the perfect alignment, the Earth's shadow will cover the moon partially or totally.

In June, the sun has taken over and the fields are growing. Flowers have bloomed, we're beginning to see some early summer fruits and vegetables (a great time for strawberry crops!), and the days are getting longer and longer. It's a far cry from the darkness of winter, and we typically try to spend as much time outside as possible. It's a time for bonding with friends and family, and forging what connections we can. Nurture your relationships, your garden, your career, and your soul this month.

This is the month where magical workings are well suited to maintaining and enhancing things you already have. Weed your garden, prune the bushes, give your lawn all the tender loving care it needs. Take time to let your personal life blossom as well -- focus on things that improve your job or education, as well as your relationships with family and friends.

Use the full Moon for any immediate need: a sudden boost of power or courage; a change of career; location or travel; psychic protection; healing acute medical conditions; a large sum of money needed urgently; consummation of love or making a permanent love commitment; justice, ambition and promotion.

This is the day of full power but also of instability, as astrologically the Moon is in opposition to the Sun. Since the full Moon rises close to sunset you can have the Moon rising in the East and the Sun setting in the West, a powerful backdrop for any change you intend or wish to make.

I myself shall be attending the Sacred Mists Full Moon ritual! (www.workingwitches.com)