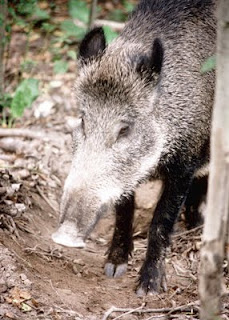 Recently through a series of meditations devised by my dear May King, Talorgan within Sacred Mists I discovered a new life totem animal...The Wild Boar.

The Boar is a very powerful totem.
It is a totem of prosperity and spiritual strength
and a strong protector totem.
Boar is deeply connected to Mother Earth
and the mysteries of Nature.

The Wild Boar has been the symbol of warriors for centuries. The Celts believed that the Boar, which they called Torc or Bacrie, was their ally in war and there are many Celtic myths surrounding this noble animal. A famous Irish legendary boar was Orc Triath, which the Goddess Brigit owned. In the Arthurian tales of the Mabinogion the boar Twrch Trwyth was a terrible foe to Arthur. The White Boar of Marvan sent inspiration to its master to write music and poetry.

Native American Indians make war masks in the likeness of the Wild Boar to frighten and intimidate their enemies. The Wild Boar is mostly seen as a masculine entity and Totem, enriching the male virtues of bravery, nobility and fierceness in battle. The Wild Boar spirit will balance out male energy and ground the more virtuous aspects of the masculine nature.

The powerful Wild Boar has large tusks that can be deadly. They are fierce animals and signify the warrior spirit. This animal needs close body contact and tends to live in groups of fifty or more. They are clannish in nature but are wary of outsiders. Wild Boars are mostly thought of as noble and brave animals that enjoy social interaction within their group.

The Wild Boar possesses many animal virtues that are powerful and valuable and which any person would be wise to emulate or divine. One who has the power of the Wild Boar will see enhanced courage, fearlessness, and nobility; an increased ability to strategize and plan action aimed at obtaining success. Prosperity, re-birth and chivalry are also all part of this noble totem’s magic.

If boar shows up as your totem, he could well be asking you to stand up, have faith, and move forward without fear. If you do this, whatever fears you had will soon become distant memories rather than present reality and life can be experienced in a new and more positive manner.

The boar’s medicine is deeply connected to the earth energies for they can often be seen rooting and foraging in the undergrowth of plants and trees, and although they have poor eyesight, they have excellent hearing and a sense of smell that helps them remain alert and aware of everything around them. This teaches us to look beneath the surface at things that may be troubling us, to uncover what lies hidden and effectively deal with it by fine-tuning our senses and paying attention to whatever is around us.

Boar initiates transformation through self-discovery by using all our senses efficiently. Those with boar for a totem would be wise to follow his lead, for by doing so, you can strengthen and develop your character and improve the quality of your life. Boar is a powerful totem to have, but not an easy one to work with, for order and efficiency in all we do is a main part of his medicine.

In times long gone the boar was one of the most ferocious and aggressive animals a person was likely to encounter, it was also one of the best and most popular animals to hunt being admired for both its strength and courage. Many warrior’s helmets bearing boars-head crests have been found in archaeological sites, and are thought to have been worn as a symbol of the wearers courage in battle. In Beowulf, the epic Anglo-Saxon poem (c. 700), Beowulf himself led his warriors into battle wearing a boars-head helmet as a symbol of his power and leadership.

To the ancient Celts the boar was thought to have great sexual power and was regarded as a symbol of fertility, abundance and future prosperity. Charms and amulets made from a boars tusk were commonly worn for protection, and the boar was depicted on many cult objects. One can clearly be seen on the Gundestrup Cauldron (circa. 100 BCE, discovered in a Denmark peat bog in 1891), as one of the animals attending Cernunnos the Celtic Horned God.