Another set of my favourite books to read I would like to share with you (and in fact my son has just started reading them too)... 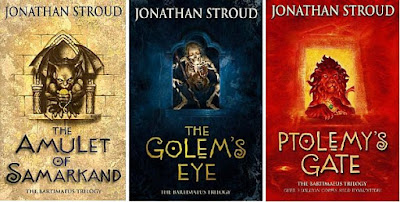 The Bartimaeus Sequence by Joanthan Stroud

The Bartimaeus Sequence is made up of four novels featuring the grumpy, sarcastic and resourceful fourth-level djinni, Bartimaeus.

The Amulet of Samarkand, The Golem's Eye and Ptolemy's Gate are set mainly in an alternative present-day London. They follow Bart's relationships with his young master, Nathaniel, and with Kitty, a fiery member of the Resistance against the magicians.

The djinni Bartimaeus is summoned by an ambitious young magician, Nathaniel, and sent off across London to steal the Amulet of Samarkand from the sinister Simon Lovelace. A whirlwind of espionage, murder and rebellion ensues.

The magician Nathaniel's fledgling career in government is imperilled by a series of mysterious attacks on London. Once more he is forced to summon Bartimaeus to help him out. Meanwhile, the Resistance leader Kitty and her friends embark on their most audacious mission yet.

Trapped for years on earth, Bartimaeus’s energies are fast running out. His master, Nathaniel, is increasingly arrogant and unapproachable and will not listen to his pleas. But as war and unrest rock the magicians’ government, Kitty uncovers secrets from Bartimaeus’s past that might help change the world forever.

Israel, 960BC. Much to his annoyance, Bartimaeus the djinni has been enslaved by King Solomon the Great, who commands his empire with an all-powerful magic ring. But things get even worse for him when he meets Asmira, a young Sheban girl sent to Jerusalem on a deadly errand. Featuring an all-new setting, and Bartimaeus at the height of his powers, The Ring of Solomon is the most action-packed Bart book so far.

More information can be found on the website http://www.bartimaeusbooks.com/
Posted by Unknown at 12:03