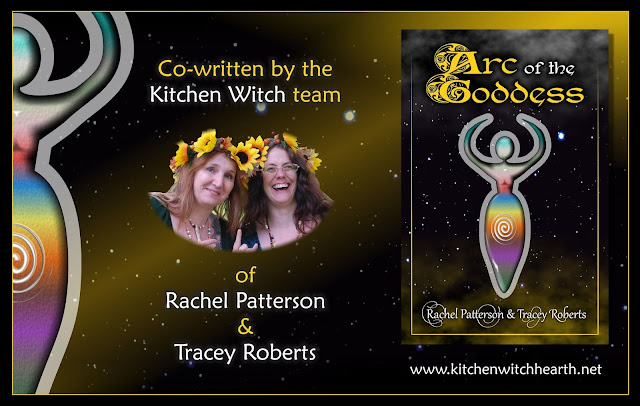 A few years ago Tracey (my partner in crime at Kitchen Witch) mentioned her idea of a 'wheel of goddesses' she didn't know at the time what it was for but put the idea 'out there'.

And as I do...from that point forward I prodded her with a long stick every so often followed by the words "any more on the goddess wheel yet?"...

Then the Celtic Goddess 8 week online course emerged which was great fun to write and work with and blossomed into the Celtic God and Dark Goddesses online courses too...but we later realised that it wasn't connected to the original goddess wheel idea.

Until about two years ago when Tracey had a lightbulb moment and the goddess wheel became The Arc of the Goddess year long course, it took a long time to put it all together because we cover twelve months of work and study and include 108 different goddesses but it was then launched last August. Together with lots of lovely students we have been working with the course ourselves for the past eleven months and so far I have met and worked with eleven different goddesses, crystals, herbs and meditations and I have to say it has been an enlightening experience.

So...we approached my publisher Moon Books with the idea of taking the course, adding to it and making it into a book...which they very kindly let us loose with.

The paperback book Arc of the Goddess was published yesterday and has already had a heap load of pre-sales for which we thank you all profusely.

Whilst the paperback was in production we then worked on a set of goddess oracle cards to accompany it but after much discussion, designs and investigating printing costs we realised that 108 goddesses did not work as a set of cards so with a huge amount of design work from my husband the Arc of the Goddess desk oracle was born which was released last month.

From a niggling idea...great things have grown!