Whilst working with the Arc of the Goddess course this month I was drawn to connect with a fossil, the echinoid - in my journeying with it I was prompted to do some research - there are plenty of myths and legends associated with them so I thought I would share with you: 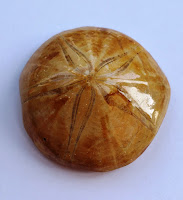 Echinoids have lived in the seas since the Late Ordovician, about 450 million years ago. The living representatives of echinoids are the familiar sea-urchins that inhabit many shallow coastal waters of the world.

Echinoids are marine animals belonging to the phylum Echinodermata and the class Echinoidea. They have a hard shell (test) covered with small knobs (tubercles) to which spines are attached in living echinoids. The test and spines are the parts normally found as fossils.

The Echinodermata take their name from the Greek words for spiny skin, a very conspicuous feature of many living echinoids. Since ancient times they have been revered as objects of religious or superstitious power.

In Denmark, echinoids were thought to be thunderbolts, and used to protect against lightning and witchcraft.

Originating from Suffolk in Eastern England, the folklore name of Fairy Loaves was given to the heart urchin Micraster because they resembled round loaves of bread. People would place an urchin by the heath in hope that it would ensure the household would always have bread. If the household went without bread for more than a week it was thought witchcraft had stopped the Fairy Loaves' protective powers.

Shepherds Crowns and Pixies Helmets
According to Bassett's 'Formed stones, folklore and fossils' (1982), shepherds may have come across these echinoid fossils while caring for their sheep on the downlands of southern England. The shape of some echinoids resemble a slightly pointed hat or crown hence the reference to tiny headgear. They were believed to bring prosperity and good luck.

Witch's Charms
The five lines across the fossil were considered by witches to resemble the five points of the Pentagram and were considered as magical prized possessions by those who collected them.

The fairy loaf in Suffolk was called 'pharisee-loaf' which at some point became 'farcy-loaf'. Farcy is a disease in horses and it has been suggested that the fossils were also used as charms by farm horsemen.


In other myths, fossil echinoids are considered to be Snakes' Eggs. It was thought that at midsummer magical Snake Eggs were formed by the froth from snakes. The froth, shaped into a ball, was believed to have the power to protect one from deadly poisons. If stolen from the snakes during midsummer's eve and kept on a piece of cloth, the ball would retain its magical powers.

They were once frequently displayed on the windowsills of Sussex cottages as good luck charms, to protect the cottage from being struck by lightning, or for predicting rain (this could be true, as moisture present in the atmosphere may condense on the fossil first). They were also supposed to keep milk fresh.

Another name for echicoids was eagle stones, as the marks on them resemble claw marks.

In Denmark, they were thunderstones. Crusaders collected Jewstones, which were echinoids from Ancient Judea. They wore them as lucky amulets.

Some echinoids are heart-shaped, so people have thought that they were the hearts of children, turned to stone.

Another legend says that Balthazar, one of the three Wise Men was following the Star of the Nativity when he met a girl. To remind him of his journey, the star drew itself onto the local rocks!

In the USA they are called Sand Dollars.

In Scandinavia they were used to keep away spells and witchcraft. Beer was poured over them as an offering and they were sometimes anointed with butter. They were also thought to offer protection from elves.

In Switzerland the owner of a 'thunderstone' would whirl it, on the end of a thong, three times round his head, and throw it at the door of his house at the approach of a storm to prevent lightning from striking the house.

In Italy they were hung around children's necks to protect them from illness and to ward off the Evil eye.

In Roman times they were sewn inside dog-collars along with a little piece of coral to keep the dogs from going mad.

In the French Alps they were used to protect sheep, while elsewhere in France they were thought to ease the pains of childbirth.

In Burma they were used as a cure and preventative for appendicitis.

In Japan were thought to cured boils and ulcers.

In Malay and Sumatra they were used to sharpen the kris, a ceremonial dagger, and were considered very lucky objects.

Among the Slavs they cured warts on man and beast. They were also thought to be able to reveal hidden treasure if used during Passion Week.

Stomach Remedy
It has also been suggested that the chalk filling the echinoids may be an effective cure for an acidic stomach. Given the composition chalk (calcium carbonate) this is perhaps not such an unreasonable idea. According to Kennedy (1976) these 'chalk eggs' could also cure sea-sickness and many travellers would not board ship without them.