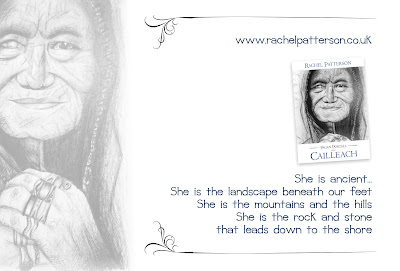 The Cailleach in Scotland

In folk stories from Scotland it is said that The Cailleach rises at Samhain and brings with her the snow, ice and harsh weather until Imbolc when she turns back into stone.  The stone remains damp as it contains her life essence.  She is also said to spend her entire time chasing after her son or in some stories her lover.

She is also considered the daughter of Grainne, or the Winter Sun.  The old Celtic calendar had two suns, ‘the big sun’ which shone from Beltane to Samhain and ‘the little sun’ that shone from Samhain to Beltane eve.

There are many stories and place names associated with the Cailleach in Scotland and the Hebridean islands.  In some parts of Scotland she is known as the Carlin and occasionally referred to as Queen of the Witches.

She is said to have created a huge amount of the Scottish landscape wading through the surrounding waters up and down the country dropping large boulders from her creel (apron) to make the islands and using smaller rocks to create the mountains. Some of these are Beinn Chailleach Bheur in Argyllshire,  Beinn na Caillich on the Isle of Skye, Loch Awe in Argyll and Bute and mountains in Lochaber.   A large furrow down the side of Beinn na Cailliach called Sgriob na Calliach (furrow of the Callieach) is said to have been created when she stumbled and slid down the hill. Other place names in Scotland such as Cailleach Vear – a rock off Mull, Sgeir Cailleach – Jura, Ceum na Caillich – Arran, Cailleach Head – Ross, Carlin’s Loup near Carlop and Creagan Biorach na Cailliche Moire on Lewis to name but a few.

One story tells of the Cailleach Bheur as a blue faced hag of winter who ages in reverse.  She starts out old, gnarled and ugly and gradually becomes young and beautiful perhaps symbolising the progression of winter to spring.

Known sometimes as ‘Grandmother of the Clans’ or ‘Ancestress of the Caledonii Tribe’.  The legends of the Caledonii tribe talk about the ‘bringer of the ice mountains’, the great blue old woman of the highlands.  She was a mountain giantess who protected the tribe and kept them safe.

Scotland was called Caledonia, a Latin name given by the Romans; some suggest that this translates as ‘the land given by Cailleach’.  I suspect the name referred to the Pictish tribe - the Caledonii that lived in the area during the Iron Age and Roman times.  Tacticus (a Roman historian) tells that the Caledonii had ‘red hair and large limbs’ and were a fierce people that were quick to fight off invaders.
'The tribes inhabiting Caledonia flew to arms, and with great preparations, made greater by the rumours which always exaggerate the unknown, themselves advanced to attack our fortresses…’

The Cailleach in Ireland

Ireland has the legend of the Cailleach Bhearra a sovereignty queen from West Cork.  Her name also pops up in the landscape on Ceann Cailli (the hag’s head) at the cliffs of Moher in County Clare and Sliabh na Cailli (the hag’s mountain) in County Meath along with Slieve Gullion in County Armagh, Slieve Gallion in County Derry, Sloc na Caillagh on Rathlin, Carnacally in County Armagh which also has a river Callan and Caislean na Caillighe on Lough Carra plus many more.

It is said that The Cailleach raised the mountains and hills in Ireland and placed cairns and barrow mounds upon them.    This seems to reaffirm her connection with death and the underworld but also of course rebirth.

In Sligo, the megalithic site Carrownamaddoo  (Castledargan) is also called Calliagh A Vera’s House. In the mountains above Kilross, in western Tipperary stands another stone formation often referred to as the House of the Cailleach. The Labbacallee Wedge Tomb in Cork is said to be her burial place; the name, from Irish Leabhadh Chailligh or Leaba Caillighe, means ‘the Old Woman’s Bed.’

La Fheill Brighde is celebrated on 1st February and is the day that the Cailleach gathers her firewood to last over the winter months.  If her intention is to make the winter last a little longer she will make sure the weather on 1st February is warm and sunny so that she can gather plenty of firewood.  So if the 1st February is a cold and wet day people assume that the Cailleach is already asleep and will soon run out of firewood, predicting that winter is almost over.

The Cailleach in England

There are some folk stories around parts of England that refer to a giantess although there doesn’t seem to be any specific mention of The Cailleach by name a lot of the stories refer to an old woman, hag or old witch. (Also see Black Annis).

Standing Stones
It seems that a lot of standing stones in England (and across the globe) are often referred to as ‘old woman’, most of them have little or no legends or stories to go with them but maybe they do refer to the ancient goddess, the Cailleach when she is turned to stone? The Old Woman stone on Bamford Moor, Derbyshire and another Old Woman stone in Cornholme, West Yorkshire are just two examples.

There is also a huge stone on the western boundary of Pevensey in Sussex, folk lore says that an old woman was bringing the stone as her contribution to the foundations of Pevensey Castle, on the way her apron strings broke and the stone dropped so she left it there.  Another apron string story…

In the North of England in the country of Cumbria sits a huge 350 feet diameter stone circle consisting of 69 stones, the tallest of which is about 12 feet high and carved with symbols.  The four corners face the points of the compass.  The stones date back to around 1500BC.  The largest stone is called Long Meg who was said to be a witch who with her daughters was turned to stone for cursing and dancing on the Sabbath (apparently partying on the Sabbath is a bit of a no no).  The circle is said to be filled with magic and you are supposedly not able to count the same number of stones twice.