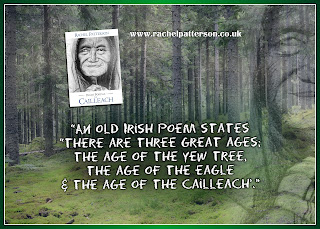 The focus of stories place the Cailleach in Scotland or Ireland with her morphing into Black Annis in England but her name can be found (possibly) in other countries. In his text Histories (431-425 BC) Herodotus mentions a tribe on the Iberian Peninsula which he called the Kallaikoi (in Greek). Strabo mentions the same tribe (7 BCE-23 CE) as does Pliny (77CE). Both the latter refer to the tribe in Latin as Callaeci, Ptolemy suggests that the meaning of this name is ‘worshippers of the Cailleach’. So it is possible that the Cailleach was known originally in Spain. This tribe may have migrated to Ireland at the end of the Ice Age bringing the worship of the Cailleach with them.

When the Romans found the Callaeci tribe they called the area they lived in ‘the land of the Callaeci’ (not very creative but it makes sense). That land became known as Gallaecia and then its present day name of Galicia.

In Scandinavia there is a triple goddess called the Mo Braido, the Mamma/Omma and the Kaelling/Karring. The Karring being the old crone figure who controls the winter storms, guards fresh water wells and has a black rod that spreads ice and frost. She also has a tinder box that produces the sparks of life. She creates the landscape by dropping boulders and stones from her apron and she lives in a cave. Over the winter she looks after the sleeping plants and is considered to be the mother of all creation looking after transformation and the cycle of life…definitely sounds like a familiar description.

There is a Norse ballad – Hermod the Young that tells of a hero who saves a young maiden that has been captured by a giantess. He visits the mountain dwelling of the hag and is permitted to stay the night. Using his cunning he persuades the giantess the next morning to visit her neighbours, while she is gone he rescues the maiden and they flee from the house (on skis…because it is snowy). The giantess chases after them, as Hermod and the maiden come to a salt fjord with the giantess hot on their heels the giantess is suddenly turned to stone by the sun that rises just at that moment. Although in the Swedish version it is the influence of an iron cross by the fjord that turns the giantess to stone. Danish tales suggest that the maiden in the ballad is Sigri, daughter of Siward who is carried away by a giant who is slain by Ottar. The hero loves the maiden but she does not feel the same way and takes refuge in a hut owned by ‘a certain huge woman’ where she looks after the goats and the sheep. At the end of the story she marries Ottar who takes her away.

From Romania we get the story of a great witch who ran a coven of eight other witches. She set the task to her daughter in law of washing a brown fleece and making it white. The young lady washes the fleece in a stream but it is hard work, Father Winter takes pity on her and takes the fleece from her changing it to white. When she returns home with the fleece and a bunch of flowers she picks on the way the old witch is furious and gathers the other witches with her to fight against spring. Now that does sound very familiar…storms were summoned but the sun shone through and spring triumphs over winter. The nine witches are turned into stone which is where they sit on top of the mountain Silash in Temesvar.

The Tuatha De Danann were said to have journeyed from Scandinavia through Greece then Scotland and onto Ireland, their journey does seem to mirror some of the Cailleach history as well.

Malta has huge Neolithic megalithic structures and temples some of which date back to 3000BCE and these were said to have been created by a giant goddess called Sansuna. She carried huge stones on her head and in her hands to create the buildings. Was this the earliest beginnings of the goddess Cailleach?

And over in Greece we have Lamia, Queen of Libya. She lived in a cave and left to her own devices became evil and stole children. A similar story tells of Lamia the Gello who can shapeshift into a sea creature or bird and likes to eat babies. If either of these hags is killed no plants grow on the ground where their blood falls.

The Barclodiad-y-Gawres burial mound on the Anglesey coast in Wales is a chambered cairn made from five carved stones (now capped by concrete to prevent erosion), the stones are carved with spirals, cup marks and zig zag patterns. According to local folklore a giantess was carrying an apron full of boulders when the weight became too much and the apron strings broke, the rocks fell out and created the cairn.

On the island of Jersey although the Cailleach does not seem appear by name, they have folk lore tales of faeries that carry stones in their aprons which are dropped to create part of the landscape such as three menhirs at Le Clios des Tres Pierres and La Table des Marthes at La Corbiere. The same seems to apply over the water to Brittany in France where faeries also created landscape by dropping boulders from their aprons.