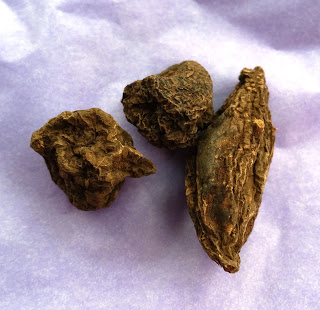 All sorts of herbs are used in hoodoo magic, all of the usual household ones along with a few more unusual ones. I haven’t included a complete list here as it would go on forever, but here are some of the more popular ones used in Hoodoo.

This root was used a lot in Adam and Eve magic believed to promote true love and a good strong equal partnership between a couple. Also used for sexual problems within a relationship. However Adam and Eve root is not endangered and should no longer be harvested from the wild. Unfortunately there isn’t a substitute for the root either, so be aware if you purchase ‘Adam and Eve’ products they probably won’t have the true ingredients.

Another herb used for prosperity and money draw spells. It can be sprinkled into your purse, kept in your money box or used as a powder.

This has many uses within hoodoo – warding off evil, luck, health, family matters, peace, strength (especially for women), uncrossing, jinx breaking and a powerful Guardian.

Useful for gamblers, luck and sexual power. (In the UK you could substitute a conker).

Clover is probably used all over the world for luck! Within hoodoo it is also used for prosperity and money draw spells. It is also considered sacred in that having three leaves it represents the trinity.

Coconut within Hoodoo is used for domination, a whole coconut often being used to represent the victims head and mind.

You’ve got to love the folk name for this one! It is a very strong smelling powder (hence the name) and is used in Hoodoo for protection, banishing, curses and working against your enemies. (When handling asafoetida I recommend wearing gloves…otherwise you will carry the scent on your hands for ages!).

These ‘shoestrings’ are roots from the plant and are used for protection, luck, job seeking and keeping out the devil – the ‘shoestring’ meant to trip him up!

The plant has five leaves that are segmented and look a bit like a hand – hence the name five fingers. It is used for luck, gambling, money drawing, employment and favours.

High John the Conqueror root is one of the main herbs used in Hoodoo magic.

The story goes that John was a prince, son of an African King and that he dedicated himself to helping others, those that were tricked by their white masters. He is a trickster spirit and also a hero of folklore.

The roots that carry his name are: High John, Dixie John and Little John. High John is said to carry the tricksters spirit within it.

John the Conqueror Root (Ipomoea jalapa, purge, pandurata) brings with it the magical properties of power, prosperity, strength, luck, love and the ability to conquer all within its path.

Lettuce is used mainly in money draw spells. You can use any type of lettuce but make sure the leaves are fresh, the best ones are the darker outside leaves. Greens can be used in the same way.

This is used mainly for money drawing, prosperity, uncrossing or to cool and calm a situation or person.

Used in hoodoo by women and men to attract and control a man.

Used mainly in protection spells but also for love ones. Wearing a sprig of rue will ward off the ‘evil eye’.

Used in powders, incense and foot track magic for innocence, purity, chastity, feminine issues and concerns of a sexual nature.

A good all round herb, the leaves of the willow are used for love, luck, health and protection.

Used for love, break up and enemy spells and also good for stuffing doll babies (poppets).