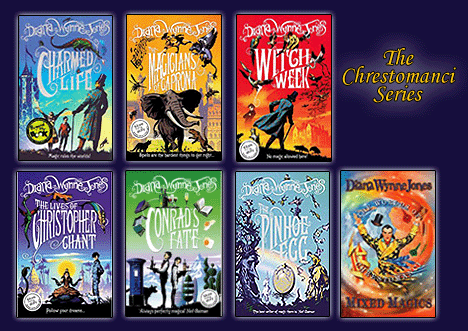 This lady wrote a huge amount of books in the humourous fantasy realm, my favourites are the Chrestomanci series.

A bit of blurb about the first four books in the Chrestomanic series:

The Lives of Christopher Chant When Christopher discovers he has nine lives and is destined to be the next 'Chrestomanci' he is not pleased. But he soon finds that destiny is difficult to avoid, particularly when an evil smuggler, The Wraith, threatens the ways of the worlds...

Charmed Life Gwendolen and Eric Chant are taken to live with a powerful nine-lifed enchanter in Chrestomanci Castle. Gwendolen is thrilled, for she is a gifted witch. Eric, on the other hand, has no talent for magic at all. Watch the sparks fly, as life with Chrestomanci takes an unexpected turn...

Witch Week The note to Mr Crossley was clear: SOMEONE IN THIS CLASS IS A WITCH. The most awful thing was, the note might be true - for this was a school for witch-orphans. A visit from the Divisional Inquisitor would mean trouble... real trouble.

The Magicians of Caprona Casa Montana and Casa Petrocchi look after the magical business in Caprona. The families have been feuding for years, so when all the spells start going wrong, each naturally blames the other. When Young Tonino Montana and Angela Petrocchi disappear, terrible rumours of a White Devil start...