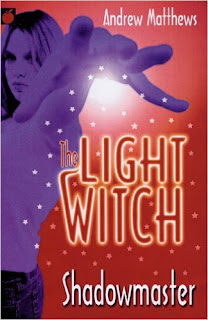 The Light Witch Trilogy by Andrew Matthews is another set of books that I like to read and re-read.

Written for the teen market they are easy to read but have a good few twists and turns.

Book 1: Shadowmaster
Book 2: The time of the stars
Book 3: The Darkening

These books tell the story of eleven-year-old Dido Nesbit - only Dido is no ordinary eleven-year-old - she's actually a witch! Descended from a long line of light witches, Dido is still learning about her magic. But when she and her family move to the town of Stanstowe, she knows enough already to sense an evil presence in the air. Dido realises that a shadowmaster is at work - a servant of the mighty leader of shadow magic, Spelkor, and the enemy of light magic. Soon Dido finds out that it's her destiny to try to save light magic from being taken over by Spelkor. Many battles lie ahead but first Dido has to destroy the Stanstowe shadowmaster if she's to have any chance of survival. And she doesn't even know where to begin. As the shadowmaster draws near, Dido suspects all those around her. The book reaches its dramatic conclusion when she uncovers the identity of the Stanstowe shadowmaster and has to pits her wits against him...

This isn't deep and dark and hobbity but it is a good easy interesting read, I like them a lot.  Andrew Matthews doesn't seem to list them on his website anymore but you can get them via Amazon and the second hand copies go for 1p.
Posted by Unknown at 10:21