Reflections of a calendar year 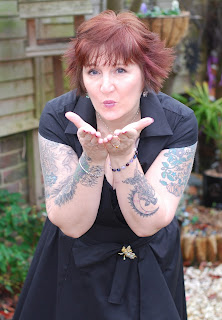 I don't do the New Year celebration thingy but it is a good point at the turning of a calendar page to reflect on the twelve months that have been and gone...

Most importantly I need (and want) to say a huge thank you to everyone that has supported me this year, you guys totally rock and make all the hard work and hair pulling really worth it ♥

Witchfest in November was a total highlight in a new fabulous venue and it still overwhelms me that people actually turn out to hear me waffle innanely, I am incredibly thankful to you all.

In September I started a short online university course - Victorian Popular Fiction and the Occult which was incredibly interesting and provided a huge reading list (that I am still working through).

In February it was my pleasure to give a talk about Seasons of Magic at the Enchanted Market and again another event is set for 2017 (I will be talking about Animal Magic this time).  Organised by the always hard working Baz and Max of Spriggan Mist it is a fabulous event with stalls and live music.

This year also saw a flurry of books from me:

Pagan Portals The Cailleach at the end of July - a labour of love writing about my matron goddess (watch out for a special ebook price deal in January).

Arc of the Goddess at the end of June - co-written with Tracey and founded from our online course.

The Art of Ritual at the end of May - including fabulous ritual scripts from the talented Kitchen Witch Hearth Guardian team.

November also saw another book published, this time the bulk of the work was created by my very talented daughter Emma and my hubby Pete - the Moon Books Gods and Goddesses Colouring book was published in the last week of November and sold so well in pre-orders that it had a second print run before the official publication date.  A lot of time and effort went into the book so we were incredibly pleased with the results and the support from all you guys that purchased it.

I was honoured to take on two new regular blog roles this year:

In March I started The Hedge Witch blog over on Witches and Pagans http://www.witchesandpagans.com/pagan-paths-blogs/hedge-witch.html
and
in October Beneath the Moon was born over on Patheos Pagan http://www.patheos.com/blogs/beneaththemoon/

I purposely tried not to take on too much in 2016 so as not to overload myself, it didn't go quite to plan but I made a valiant effort!

My next book Pagan Portals Animal Magic will be released in March.

And of course there are more book contracts signed which I have started writing...

Witchcraft into the wilds
Pagan Portals The Triple Goddess
Beneath the moon: Witchcraft and moon magic for a deeper practice

As I haven't actually finished writing any of them yet there is no release date but watch this space...

The Kitchen Witch forum/School is also getting a bit of a makeover in the next few days, entering 2017 with a new name; Wyrd Witches and pretty new graphics.  The Kitchen Witch school remains the same but as it is only part of what we do now we wanted something to encompass everything - the school, the goddess and god courses, the herbal course and a couple of new courses that we are also working on for next year.

Life is fluid and ever changing and sometimes it can be difficult to go with the flow rather than fight against it.   This year has taught me a lot and it has been full of challenges, successes and a few flops but I am still moving forward, onwards and upwards.

I am sending out warm wishes and huge thanks to all my family, friends, colleagues, students and human beings on the planet, may the calendar year ahead be a happy, healthy and successful one ♥
Posted by Unknown at 12:10