On the sixth day of Yule my Coven gave to me...a bottle


Alcohol is bound to appear at some point over the holidays whether it is in fruit or hops form: 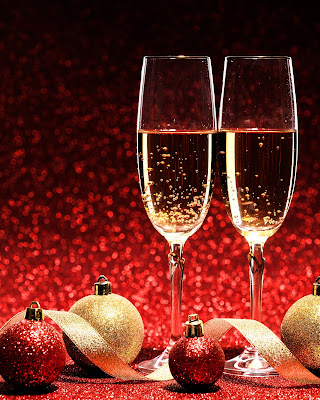 Grapes are the clusters of berries from a deciduous woody vine, they can be eaten in all sorts of ways including fresh just as they are or made into jam, juice, jelly, vinegar, oil, dried to make raisins or what I am sure is the most preferred way to eat them…wine.

Don’t just think about using the fruit of the grape in your recipes don’t forget about the vine leaves too.

Grapes have a huge spiritual energy to them and can help us with spiritual connection, visions and dreams.

Whenever I think about Greek or Roman temples I visualise them surrounded by grape vines.

The grape is a moon ruled fruit so works very well in all kinds of moon magic.

The grape is also symbolic of abundance and the harvest and associated with the Egyptian goddess Hathor, the Roman god Bacchus and the Greek god Dionysus.

To make a simple prosperity talisman wrap a vine leaf around a shiny silver coin and tie with green or orange string or ribbon, carry with you to bring prosperity your way.

Planting grapevines on your property helps to bring abundance into your home.

Use wine to asperge the earth before you cast a circle or as an offering to deity…actually pouring wine onto the ground has to be a sacrificial and giving act in itself!

Beer is made from grain and water (and other stuff obviously) so it brings together the elements of earth and water.

Apparently on Samhain Celtic warriors held contests to see who could drink the most beer, believing that the course of action would make them immortal…just like any Saturday night down the pub then…

Don’t tell the blokes but according to historical data…women invented beer.

Beer is a good liquid to use to purify the body, just add a little to your bath water or drink a small amount…yes I did say ‘small’ amount.

The Egyptians believed that dreaming of beer was a good omen.

Beer has long been used as a ritual offering and makes a nice ritual drink when in circle.

From A Kitchen Witch's World of Magical Food