I will not be putting all my crystals under the moon... 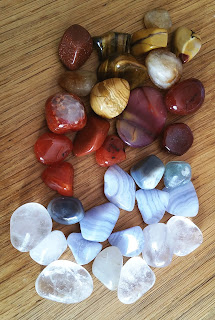 Today is a full moon and facebook is full of memes advising everyone to pop their crystals out to cleanse, purify and soak up the moonlight...but I don't...and it isn't because I don't like being told what to do...

I do put some crystals out on the full moon but not all of them.   There are some crystals that I think suit the moonlight but others that I find work better by being put out in either the sunshine or even the rain and wind.

For instance I put stones like moonstone (obviously!), quartz and blue lace agate out in the moonlight.

But for stones such as sunstone, topaz, tiger's eye, carnelian, amber and all the fiery stones I like to put them in the sunshine so that they soak up the masculine energy instead.

And then we have watery stones, if it is raining then there are some stones that love being out in it such as amethyst, blue lace agate and lapis.  (Note: don't put porous stones out in the rain...they may not be there when you get back...).

You can even take it further and seperate them into the four elements and put out air stones on a windy day and bury earth stones (carefully and mark where you put them) in the soil.

Air stones would be things like amethyst, citrine and turquoise.   For earth these stones might be agate, jasper and jet.

Obviously some of the stones will fit into a couple of the categories and I also go by colour; yellow, red and orange stones go in the sun and white, blue and pale stones go under the moon.

Trust your intuition...but I prefer not to lump all the stones under the moon because it is incredibly powerful and I personally feel that some of my crystals work better with sun, wind or water energy instead.

Go with what feels right for you...