As it is a New Moon and I need to stop procrastinating and bring in some of that elusive focus thingumy...I thought I would work some magic... 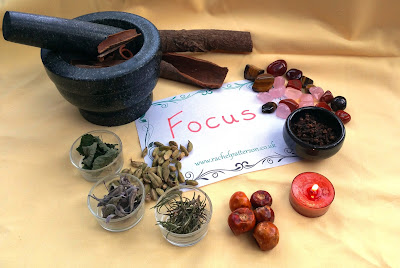 Colours:
These can be brought into play using coloured cloth, scarves, coloured pencils/pens or candles.

Crystals:
Crystals can be placed on your altar, carried in your pocket, put around your candle or made into a crystal grid to bring in the energy.

Herbs & Scents:
These can be used in incense blends, magic powders, tea blends (only the edible and non poisonous ones obviously), popped onto your altar, used for dressing a candle or in an oil burner or made into a pot pourri mix.

I wrote the word 'focus' on a piece of paper and used that as the centre then I charged each herb/spice and crystal that I chose to use with my intent and put them on my altar around the intent paper.  I didn't have a particular design in mind I just let my intuition take over.  I also chose an orange candle to light as well.

The tea will be drunk as I prepare to work and the incense will be lit at the same time along with the candle.

The lists above are just suggestions...go with your own intuition.