Spot the Dog versus works of Shakespeare... 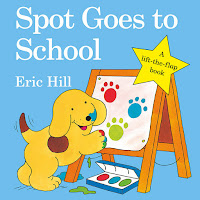 I have had the fabulous opportunity of writing essays for several collaboration books put together by my publisher and I am very proud of the articles that I wrote especially the one about Maiden, Mother, Pensioner in Naming the Goddess oh and being asked to write the forward for the Witchcraft Today 60 Years On was a complete honour.

I recently had the offer of writing for another collaboration *not leaking any secrets* but this one has a political slant from a pagan point of view and initially I said "yep count me in"...until the other very talented authors started suggesting their subject titles...

Now I freely admit that I don't 'do politics' not in any way shape or form, I think all politicians are pretty much as bad as each other.  Although I did put my cross in a box in the recent election it was a choice made along the lines of "best of a bad bunch".

Anyway...I digress...when I started to read the subject suggestions the other authors were putting forward I started to wibble...quite a lot.   I am not stupid by any means, I was in the top stream at school, I gained plenty of O levels and was signed up for college to study art, english and business studies, I was even set to go onto university.  However in the summer holidays before college started I was walking to secretarial college one day (on my way to a shorthand course) and saw a job advertised in the Job Centre window...I went for it and got it...30 years later and I haven't been out of work for a day.  But I obviously never made it to college or university.  I have for the last 24 years held the position of Personal Assistant to the CEO of an international consumer electronics company (albeit for the past 7 years part time and from home) and in my 30 years I have worked for directors, organised company functions and parties, planned, organised and co run stands at Chelsea Flower Show, planned, organised and co run consumer electronics fairs in big London hotels and all the other stuff that you do out in the big wide world...not so shabby.

But the thought of having to write a grown up political essay of 1500 words threw me...completely.  I have to admit I put my hands up and confessed "sorry chaps but this one isn't for me".  My thoughts went along the lines of my essay looking like a Spot the Dog book for 2-5 year olds alongside works of Shakespeare...I don't need to feel that kind of embarrassment.

Now that I have released myself from the obligation I do feel relief but there is that little spark that says "could I have written it?" I suspect I possibly could have done if I had really put my mind to it but..and here's the thing, it's not me, it's not my genre, it's not what I enjoy writing about so I reckon that I made the right choice.

Sometimes in life you have to know that the right decision is not to do something and the key is to be brave enough to say no and then to feel good about what you can and do achieve already...
Posted by Unknown at 10:51