Way of the Druid

Way of the Druid by Graeme Talboys 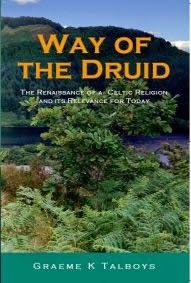 A book that takes you back to the roots providing a foundation on which to base druidry, its origins and how the druidic system linked into the practice of the ancient Celts right through to how it is practised today.  Very well researched and written, makes for an interesting read.

It's not surprising that the Druid Way is one of the fastest growing religions in the world. It's one we, in the West, all used to follow. Thrown into turmoil by the Roman Empire and then squashed by monotheism, it has nevertheless always survived in some form. But it is poorly understood and often dismissed, rarely treated seriously in religious discourse. Graeme K. Talboys offers an intelligent and well-researched exposition of the origins, history, metaphysic, doctrine and practice of modern Druids. A thorough exploration of Celtic history and beliefs is followed by an analysis of their view and its modern relevance. Massively comprehensive but very accessible, all students of religion and serious seekers will find this the definitive guide to what Druid means and how to be one today.

http://www.moon-books.net/books/way-of-the-druids-rebirth-of-an-ancient-religion
Posted by Unknown at 12:38

Email ThisBlogThis!Share to TwitterShare to FacebookShare to Pinterest
Labels: graeme talboys, way of the druid