I have to admit January is not my favourite month...having had Samhain/Halloween (my birthday) then the build up and the festivities of the Yule season January seems a bit of a let down.  No one has any money, the weather is always wet and miserable and it seems a bit flat.

So I am attempting to make January rock this year... 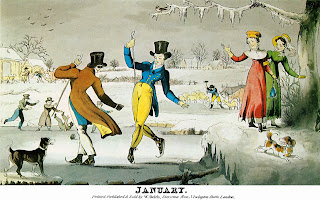 In the Celtic tree calendar January is represented by Birch, a tree of new beginnings and change, it is nourishment for the soul and brings inspiration and cleansing...perfect, sounds exactly what we need.

A time for rebirth and regeneration. As the Winter Solstice passes we look towards the growing light again.
There are also certain deities associated with January if you wanted to work with them or perhaps make a nod in their direction on your altar:

January is named after the Roman God Janus.

And on to totem animals that are associated with January, their energies will be particuarly strong this month:

Crystals to use in January:

Herbs and plants associated with January:

In season in the UK (from River Cottage Year by Hugh Fearnley-Whittingstall):

Well that is plenty to be going on with to occupy your mind and keep away the January blues...
Posted by Unknown at 09:30