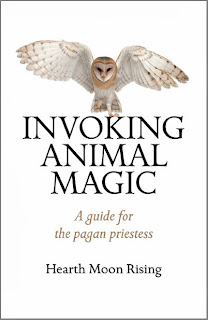 Interesting take on animal magic, this isn't the usual animal totem reference book, in fact it is not that at all.  It does however cover some of the major totems such as the snake, bats and mice but more interestingly intertwined in history, myths and goddesses.  Set out in sections with titles such as The Underworld, The Womb, The Soil, The Dreamworld and The Long Journey.

It takes you on a mystical tour of animal magic ... absolutely fascinating.

Invoking Animal Magic explores the power and wisdom of animal allies. More than a compilation of interesting facts—stories, folklore and animal behavior are integrated in a modern pagan perspective. Illustrations based on cave paintings and artifacts add a visual component to the text while thought-provoking questions and fun activities help ground the material in personal experience. Invoking Animal Magic offers an in-depth study of nine animals, each with an important place in Euro-paganism—their myths and legends, historical context and magical themes. Rituals and spells are also included in each section.


http://www.moon-books.net/books/invoking-animal-magic
Posted by Unknown at 20:31