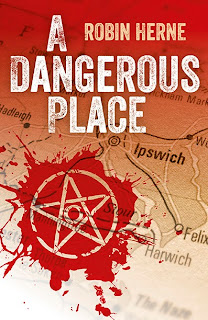 A Dangerous Place by Robin Herne

What a fabulous book! A collection of short stories, all with a pagan theme, each one with mystery woven in and all based around the same spot in Suffolk but spread out over the span of two and a half millennia, it's as if you were stood in the same spot and history rolls past you like a fast forward film. At the end of each story are the author's notes giving the reasons, explanations, whys and wherefores behind it. Absolutely fascinating and well worth reading whether you are a pagan, an historian or otherwise.

Magic and murder meet in Suffolk, with short stories exploring the spirit of place, and the dark side of belief. A Dangerous Place is an anthology of crime stories all set in the same place, but spread out over the course of two thousand years. Each crime is set against the backdrop of changing religious and magical/mystical beliefs, such as Iron-Age Druidry, Anglo-Saxon Heathenry, Victorian Spiritualism, & modern neo-paganism, and interweaves old-fashioned detection with mysticism and criminal psychology.
Posted by Unknown at 09:00