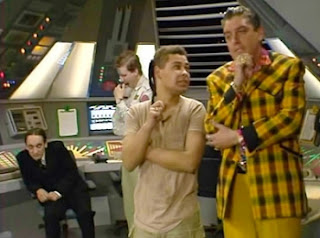 There is an episode in Red Dwarf where Lister hallucinates and it becomes reality, his confidence and paranoia materialise as actual people and although written as a comedy it speaks volumes about how we as people are and how we can be swayed by those two emotions.

I wonder if perhaps it is actually easier to listen to our own paranoia than our confidence?

This year saw the first of my books published...was I confident that it would do well?  Actually I had no idea so paranoia and confidence had equal footing really.  Thank the Goddess but it has done very well and book two sees its official launch this weekend as well - how do I feel about that?  Well...if I look at all the people that have said they are going to the book launch on the facebook event my confidence would be strutting its funky stuff around the high street wearing nothing but a pair of high heels (expensive sparkly ones) ;-) but there is still that little paranoia figure sitting in the corner saying...but what if it's just you and your mum sitting there?  My intuition, the intuition of my soul sisters and my friends at the venue (Chi Coffee) all tell me it will be busy (actually I think the word used was 'mad') but there is always that little bit of doubt.

What do we do when paranoia stands in front of us saying "you are no good, it will all go wrong, you are such a loser"?  My preference is to clout him up the side of the head and tell him to push off...it can be done but it does need a helping hand from Mrs/Mr Confidence standing beside you (still wearing stilettos) and backing you up.

We all have dreams, we all want life to be good, we all want everything to be OK.  And in the most part it can be but it takes a bit of work, a bit of effort and a bit of forethought.    Did I see myself at a book launch this time last year? Was it all part of my master plan? Nope not on your nelly, but it has happened and that is because I put it out to the universe that 2013 was going to be Year of the Witch, that it was going to be my year to stick my head above the parapet...and the universe decided that book writing and workshops was obviously the way to fulfill my request.  I still had to do the leg work to put it all into motion but the Goddess was guiding me.

And...I am loving every minute of it - no that's not Mrs Confidence strutting her stuff, it is me enjoying being able to share my knowledge and experience with other people, it is rewarding and fulfilling.

The key though is to get the balance because Mrs Confidence can get a bit lary so it is a bit of a juggling act, but then that is part of life itself...seeking the balance in all things.

Having family and friends that keep you grounded or build you up when you need it helps too!