Isle of Avalon and no computer 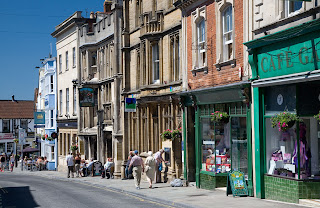 I have spent today in the Isle of Avalon (Glastonbury).

It is just over a two hour drive for me so I set off early (8.50am, I know that's not really early but I had to do the school run first!!).  I don't mind the drive too much, I grabbed a handful of CD's at random for the trip...and when I say random they really were random - Elvis, Blondie, Stevie Nicks and Alice Cooper!

Thankfully the traffic was OK and the weather was fine until the other side of Salisbury when it began to snow but it didn't come to much.

I then spent a lovely day catching up with a friend and although we did venture out of the café once to mooch about the shops it was really rather cold...so we hit another café LOL

I got back home at 6.45pm...the whole day I had not picked up any emails or messages.  I did have my phone with me but it doesn't like the signal in Glastonbury, I think it does it on purpose so that I can't pick them up...to give me a day away from techno world.

I did realise that, on my way home...the whole day (OK not quite the whole day because obviously I am on the laptop now!!) but most of the day without looking at a glaring computer screen, without typing, without being sucked into facebook and do you know what? I didn't miss it, and I actually rather enjoyed it and I should step away from the computer more often...