Woodlands in the city... 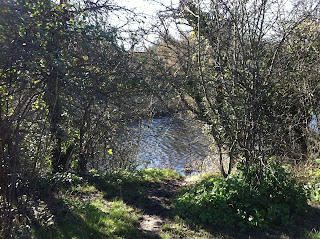 The weather this past weekend was glorious, a sign that Spring may well actually be on its way...

We headed out yesterday morning (pulled pork roasting slowly in the oven whilst we were gone) for a walk. Now I have mentioned it before but I live on the outskirts of a city, however the beach is only 10 minutes drive away and we also have a woodland only 3 minutes away...so we headed for the woods.

Hilsea Lines (as the area is called) covers an area of over 80 Hectares, it is one of the most varied wildlife havens in Portsmouth, containing woodland, hedgerows, meadows, both fresh and brackish water areas, marshland and coastal habitats.

This site was developed on what used to be a military base, the first defences being put in place there back in 1544 and then added to in 1757.  They stayed the same for well over 100 years until in 1871 they were added to.

The defences consist of a 2 mile chalk and earth rampart structure including six bomb proof Bastions and a moat.  Although some changes took place during the early 20th Century most of it remains unaltered.

The Lines were designated a Scheduled Ancient Monument in 1964 and the site was given Conservation Area status in 1994. 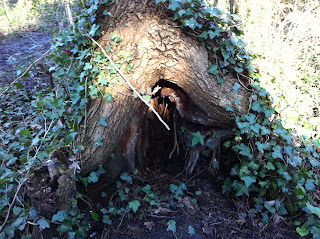 On one side you can see the Bastions, in fact part of it is used as a rehearsal/recording studio for local bands, but it is surrounded by beautiful woodland and waterways.

You can unfortunately hear the motorway in some parts, but other than that it is a beautiful setting and packed with all varieties of trees.  The waterway also plays host to ducks, moor hens and swans.

We also found a gnome hole ;-)

More information on Hilsea Lines can be found at http://www.portsmouth.gov.uk/living/3643.html
Posted by Unknown at 10:14