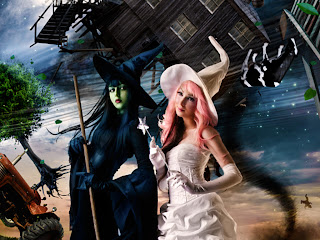 We had to have our electricity fuse box checked this morning and on my return from the school run I was greeted by two very cheerful engineers.

Whilst one worked away in the cupboard under the stairs (no Harry Potter wasn't in there...) the other one held the torch LOL  The torch holder looking around my house (the broom stick on the kitchen wall being a bit of a giveaway) asked "are you into witches?".  My reply was "I am one".

It always makes me laugh to see the reaction in people's faces when I say that, he was a bit taken aback but then started asking me questions.  The first one after 'are you a witch' is nearly always "are you a white witch?".  I don't use the term white or black when I think of being a witch, I never have, probably I should have answered "well sort of greyish really" ...  I did promise him that I was a good witch ... images of Glenda the good fairy pop into my head...and that they wouldn't have to hop out of the house after being turned into toads.

What followed then (the other engineer still busy working in the cupboard) was a 20 minute conversation where he asked all sorts of questions and genuinely seemed interested - hurrah!    When they had finished, as they left he said "I can tell people now that I have met a real witch".

How fantastic to meet such open minded people, willing to listen to the truth (albeit squished into a short 20 minute conversation) and to not judge.