Elen of the Ways, ritual and pine cones 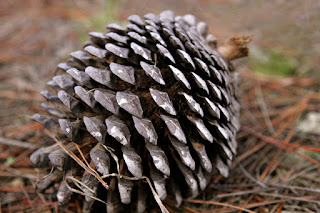 I stumbled upon a book recently whilst doing some research on Elen of the Ways, it is called Ritual Journeys with Great British Goddesses and is written by Susie Fox.

It takes you on a journey with 13 different British Goddesses, ones that were worshipped in pre Roman Britain and includes rituals and meditations - full book review on the Pagan Book Blog

I preformed the Elen ritual yesterday that is included in the book, it is a ritual for blessing new resolutions, and although probably better suited for the beginning of January I felt it was close enough to the beginning of the year.  It incorporated writing down your goals, plans and wishes for this year and burning them along with a pine cone (a symbol of Elen).

It was a lovely ritual and allowed me to play around with fire which is always a good thing (or should that be bad thing? ...).

I have lots of plans for 2013, I think it will be an interesting and enlightening year...
Posted by Unknown at 09:16

Email ThisBlogThis!Share to TwitterShare to FacebookShare to Pinterest
Labels: elen of the ways, pine cones, ritual