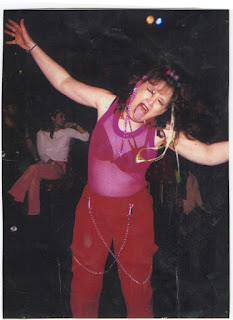 I do not like January...it is just one of 'my things' and this January has been no exception in fact probably a bit worse.  As our whole family was laid out with the flu bug over the festive season we did not celebrate and it has hung around ... for weeks it seems.  The festivities are all over, pay day seems like an eternity away and then with all the snow we have had in the past two weeks that grinds everything in the UK to a halt and all the events that have been cancelled because of it, it's not been a particularly cheerful January at all.

So after my usual daily 57 emails back and forth chat with my Kitchen Witch sisters yesterday they convinced me that I have the power to change my outlook and they are of course right.

The flu bug thingy has nearly gone, just a few sniffles and coughs but it could have been worse.

Our festivities in December were cancelled due to illness but...we are having a big family party in February instead.

Yes things were cancelled because of the snow but most have been rearranged.

So I needed to get myself up from the sofa and out from under my blanket and get some positive energy working...so I did...

This morning my day started with some Bollywood dancing, nothing fancy just me in my dining room with a DVD dancing like no one was looking...actually no one was :-)

I have showered (you will be relieved to know) and even though I will only be around the house today I have put on a pretty floaty dress and pinned my hair up (look a bit like Margo Leadbetter..) and I feel GOOD

So as usual a huge thank you to my soul sisters, don't know what I would do without them.

And January draws to a close...soon it will be February and signs of spring and today I am going to KICK BOTTOM in my pretty floaty dress kinda way.