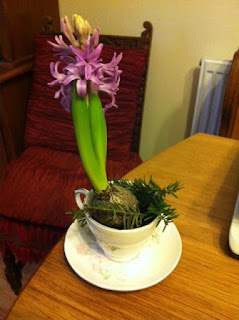 I wanted to share a picture of my flowering hyacinth with you - why? Because technically this one is a house plant and I don't do house plants...generally.

My husband makes a joke if a house plant ever gets brought into our house, he claims he can hear it scream as it comes over the threshold. ;-)

I love gardening, absolutely love all that it entails - planting, watering, dead heading, cutting back etc - LOVE being out in the garden but that is outside and we have a pretty nice healthy looking garden as a rule.  But house plants are another matter.

Any house plant that braves our home ends up dying, either from too much water, too little water, too much light, too little light, black spot, white spot, plant plague and the like - I don't know what I do to them.

However back in December I was gifted a very pretty little teacup with a hyacinth bulb in, it sits in a little soil and some pine needles.  "Just a little water now and then and it will be fine" I was instructed.

Now our house doesn't have any window sills, strange I know, it has huge 1920's ceiling to floor bay windows but no sills.  So the little tea cup had to sit on the side in the kitchen, next to a window that has indirect sunlight.  And I watered it, and I watched it and it rewarded me by flowering :-)

Mr Cunningham's Encyclopedia tells me the following about the hyacinth:

Sniffing the fresh flowers of the hyacinth relieves grief and depression and also cures fascination (actually it makes me sneeze LOL).

The dried flowers can be used in love mixtures and to ease the pain of childbirth.

Grow the plant in the bedroom to guard against nightmares.

I knew I loved spring flowers, now it seems I can grow them indoors too...