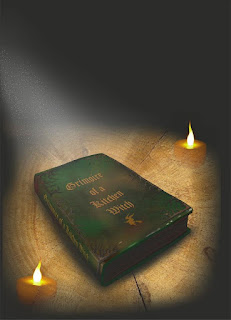 I am pondering at the moment about whether there is anything really 'new' within the Craft or whether there even should be perhaps...bear with me this blog may ramble on somewhat whilst my thoughts collect themselves into some sort of order...

I studied Wicca initially but I realised fairly early on that I am not Wiccan, but a Witch, following a more Kitchen Witchy/Hedge Witchy, folk magicy type of path.

But in the process of learning, studying, training and practising I have worked with and studied all sorts of different pathways and techniques within the Craft umbrella.   Some methods and ideas have stuck with me, others I discarded and along the way I have developed my own ideas...but there's the thing...are they really 'new' and 'original' methods?  I bet they aren't, somewhere, some when, someone does the exact same things I do.

I have also seen and heard a lot of people quote "you don't do it like that" or "that's not right" and that worries me - what right does anyone have to say that the way a circle is cast or the way a candle spell is worked or even the herb used is right or wrong?

I think one of the things I love the most about the Craft is that you can tailor it to you and your own personal methods and ways of thinking.  I am a great believer in doing what works for you, if a book says the herb to use for prosperity is basil but your instinct tells you to use something else - go with your intuition, in my experience it will work better for you in the long run if you use what feels right for you.

It actually scares me when I see people on the net or facebook stating their way is the only way - if you come across those types,  my advice would be to walk away, in fact probably run...very fast in the opposite direction.

I have also seen a few people on facebook that like to ask questions, request opinions from others about subjects within the pagan arena, what makes me cross is that when others do put their thoughts forward those people argue with them that they are wrong...everyone is entitled to their own opinion, just because you believe something to be right doesn't make it so...that is a hard lesson to learn but it is true.

But back to my original thought...I have a lot of books on the Craft in its many forms (and Druidry, Faeriecraft and various other pathways!) most of them have a common theme - working with the elements, rituals, casting circles, spell work etc all are fairly similar in concept and design but I do find it interesting to read new books, because usually there will be something that I pick up on that I didn't know or another way of doing something that I hadn't thought of.  The age old quote "if you ask 12 witches the same question you will get 13 different answers" I think is very true, everyone will have their own take on any given subject.

I recently read a very good book on chakras, it suggested that instead of working with chakras up and down in a straight line, to work with them in a spiral - interesting idea that I like the sound of, but it wasn't a new idea, the Celts came up with it apparently - but it was a new idea to me and that is what is important I think.

Yes I have been on this path for a long time now, yes I have done a lot of training, a lot of studying, read lots of books and yes I do actually get out there and walk the talk - but it doesn't mean I know everything (but don't tell my husband that LOL) we are always learning and I am always looking for new things to research, learn about and work with.    They probably won't be brand new ideas and subjects because let's face it paganism has been around for a very long time, but they will be new and interesting to me.

Always keep an open mind and an open heart, never judge another, and always keep on the look out for new things to learn...

Grimoire image by (c) P Patterson
Posted by Unknown at 09:58