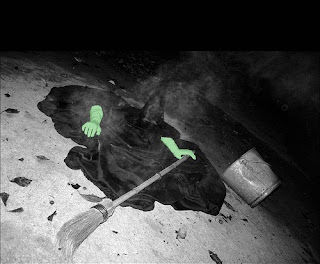 So today did not start well...

Got up late (unintentionally) and had 30 minutes to shower, wash my hair, get dressed, put makeup on, have breakfast, check emails and get out of the door with youngest for the school run - needless to say I was a bit hassled and stressed as I left the house...

Weather was clear and dry when I looked out of the window so I put on a velvet (and very non waterproof) coat...three minutes into the walk to school the skies opened and it started to rain persistently...thankfully I don't have the same reaction to water as the Wicked Witch of the West otherwise I would be a puddle of nothing but a soggy wet velvet coat now...

After dropping youngest off at school I had to pop into town to run some errands for poorly mother in law. I decided that what I needed first was a nice latte in the cafe to smooth out the stress before I started the shopping list.  Nice hot frothy latte arrived in front of me as I got my Kindle out of my slightly soggy hand bag to read whilst drinking said coffee...to find the battery was dead on the Kindle *sigh*

So I people watched whilst drinking...which included a rather loud young man in the cafe on his mobile phone swearing and cussing...thankfully he left shortly after I arrived.

Then set out to run the errands, got everything on MIL's list, except at the bank that wouldn't let me pay her credit card bill with her debit card because I wasn't her...however a very nice lady in the bank chatted to me and we came up with a solution so that was eventually sorted.

Did find some rather splendid small skeletons to put on my top hat for the Samhain ritual though...(not in the bank, in another shop LOL).

Now back home, very soggy indeed and still slightly stressed out, so I am off for some meditation, a few candles lit and some nice incense to clear my head before I start on my chores for the day.

So I am taking the bad start to the day and turning it around, nothing is insurmountable and in the scale of things the events of this morning were mere blips, I have an awful lot to be thankful for - a little rain and a flat battery won't keep this witch down ;-)

Have a good day everyone.