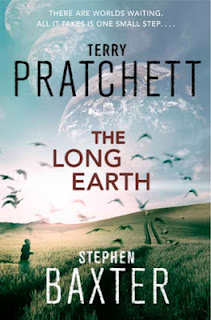 If you know anything about me you will realise that my favourite author is Terry Pratchett *bows* "All hail Lord Pratchett" ;-)

I absolutely love his Discworld books and the Carpet People ones, I also loved Good Omens, Nation and his Johnny and the Bomb series too, but I have to say when I saw the pre-publish blurb about The Long Earth co-written with Stephen Baxter I wasn't sure, it didn't really sound like my kind of thing.  However I then saw a TV chat with Terry and Rob (his assistant) where they discussed the book, how it came about and what it was about and I was tempted so I purchased it.   It may have been solely based on Rob telling the audience that the working title for the book initially was "Quantum B*llocks" which made me laugh.

And I have to say Mr Pratchett & Mr Baxter did not disappoint.

Nothing like the Discworld series but it had captivating main characters, a totally believable plot, OK based in fantasy but part of what I love about Terry's writing is that although it has the fantasy twist it is so believable.

The book story description from Wikipedia is:

The 'Long Earth' is a (possibly infinite) series of parallel worlds that are similar to Earth, which can be reached by using an inexpensive device called a "Stepper". The "close" worlds are almost identical to 'our' Earth, others differ in greater and greater details, but all share one similarity: on none are there, or have there ever been, human beings. The book explores the theme of how humanity might develop when freed from resource constraints: one example Pratchett has cited is that wars result from lack of land - what would happen if no shortage of land (or gold or oil or food) existed?

The book deals primarily with the journeys of Joshua Valienté (a natural 'Stepper') and Lobsang, who claims to be a Tibetan motorcycle repairman reincarnated into a computer. The two chart a course to learn as much as possible about the parallel worlds, travelling millions of steps away from the original Earth. They encounter evidence of other humanoid species (referred to as trolls and elves); of human settlers who learnt their gifts early, and of an extinct race of bipedal dinosaur descendants. They also encounter warning signs of a great danger deep within the Meggers causing catastrophe. The book also deals with the effects of the explosion of available space on the people of Datum Earth and the new colonies and political movements that are spreading in the wake of Step Day.

Brilliantly written, and I am pleased to say I understood it all, even though it was based around quantum physics!

I am now of course waiting with baited breath for his new novel Dodger to be released in September!

www.terrypratchett.co.uk
Posted by Unknown at 15:03