Procrastination, manuscripts and too many exclamation marks 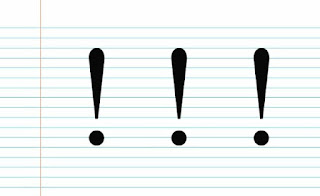 I guess I must be cut out to be a proper writer as I seem to have the art of procrastination down to a tee ;-)

Despite how exciting getting the book contract is and despite knowing that I need to finalise my manuscript, I have been tempted away from the computer with such distractions as Buffy the Vampire Slayer episodes and reading the new Deborah Harkness book.

However this afternoon I knuckled down and started going over the manuscript for Pagan Portals - Kitchen Witchcraft.

It is in Word format at the moment and stands at 53 pages which consists of 20,865 words.  All of which I need to check and double check to make sure it sounds and reads exactly as I want it to.

That is before it even goes off to be edited, primped and poked at by the publishers.

So I have read through it, and re-read through it.  I caught a couple of typos, changed some grammar here and there and have come to the conclusion that I have a very serious case of the exclamation mark.

“Multiple exclamation marks,’ he went on, shaking his head, ‘are a sure sign of a diseased mind.”

“Five exclamation marks, the sure sign of an insane mind.” (Terry Pratchett in “Reaper Man”)

“And all those exclamation marks, you notice? Five? A sure sign of someone who wears his underpants on his head."
(Terry Pratchett in “Maskerade”)

So the exclamation marks have been tossed aside although I might still wear my underpants on my head in the winter for the warmth ;-)

And I am very nearly ready to submit the manuscript, I might just have one last look...