I have a book contract - eeeep! 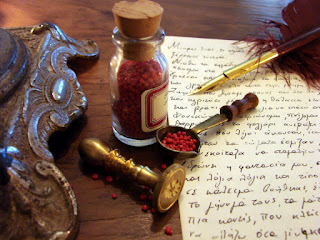 My book:
Pagan Portals - Kitchen Witchcraft
is being published by the wonderful Moon Books

Early stages at the moment and a very new experience for me.

Last year a friend of mine suggested the idea of writing a book, something I had never even considered before, so I started to jot some ideas down.  Gradually over the following months I added to it.  Then it got put on a back burner when the Kitchen Witch School of Natural Witchcraft launched as I was busy writing lessons and dealing with the set up for that.

Then over the past few weeks I kept seeing signs and hints that getting the book 'out there' might be a good idea, so last week with a mixture of excitement, total fear and a bit of protection against rejection I submitted my manuscript.

I got a reply the same day to say "we are interested in your idea please submit a full proposal" - well that sent me spinning.

Once I had regained my composure I submitted the full proposal and waited.  It is at this stage that the manuscript is read by various in house reviewers, editors and  publishers as well, they then make comments and recommendations.

I was totally surprised to receive the offer of a contract 48 hours later!  The reviewers and the publisher had liked my manuscript :-)  Well spin me round twice and call me Susan...totally flabberghasted.

For a short while then I had to act like a grown up and deal with contract stuff.

But now it's all signed and sealed.   My next stage is to get the manuscript all up together in exactly the way I want it, dot all the i's and cross all the t's then it goes off for editing, proofing and designing.

So if you don't see or hear from me this week I am being a grown up author witch ;-)