Always look on the bright side of life... 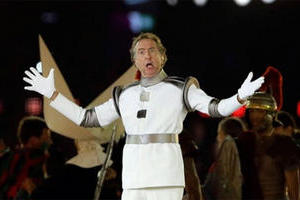 I am not one for sport and never have been and I must admit to not having any inclination to watch any of the Olympics.

However the day after the opening ceremony a couple of weeks back I saw all the hype and watched the ceremony on catch up...and was suitably impressed.

Hats off to her Majesty the Queen for showing the world she has a sense of humour with her James Bond entrance and a wonderful choice to have Rowan Atkinson showing the world that a part of being British is laughing.

My confession is that I still didn't actually watch any of the events themselves, although I have read some of the news and heard snippets about it all.

Last night we tuned into the closing ceremony and were not disappointed.

What a fabulous idea to showcase British music at its best with such superstar talents as Annie Lennox, Kate Bush, David Bowie, George Michael, Madness, Queen and the Who.  You notice I skirted around Mr Gallagher and Jessie (although she has a fabulous voice I wish she wouldn't warble, we know it's clever but it is annoying!) they aren't to my personal taste ;-)

I do believe if dear Freddie had still be on this earth that the choice for the band to close the ceremony would have been a 'no brainer' but with him gone I think The Who were bang on the mark. 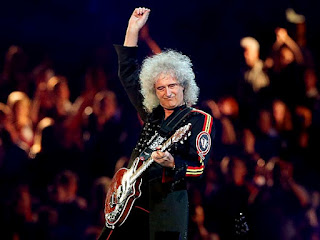 But the highlight for me had to be Eric Idle, not only did his entrance honour our mad British humour, the Pythons being a big part of our comedy history but his song "Always look on the bright side of life" to me, encapsulates the spirit of the Great British people.   It seems to me to be the way that we as a country look at life, it doesn't matter what is thrown at us we always try to make the best of it.  We got through two World Wars with that kind of attitude and numerous other major challenges.  As a people when the going gets tough we band together and look to the light at the end of the tunnel, we always have and I hope we always will.

In case you wondered why Brian May had a badger and a fox on his jacket, this is the reason save-me.org.uk