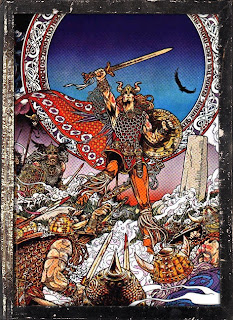 Yesterday I pulled an oracle card from the wonderful Gods & Titans oracle deck (thanks Blaidd), this is who I got, and I like him very much...


In Irish mythology, Nuada or Nuadu (later Nuadha), known by the epithet Airgetlám ("Silver Hand/Arm"), was the first king of the Tuatha De Danann. He is cognate with the Gaulish and British god Nodens.  His Welsh equivalent is Nudd or Lludd Law Eraint.


Nuada was king of the Tuatha Dé for seven years before they came to Ireland. They made contact with the Fir Bolg, the then-inhabitants of the island, and Nuada sought from them half of the island for the Tuatha Dé, which their king rejected. Both peoples made ready for war, and in an act of chivalry allowed their numbers and arms to be inspected by the opposing side to allow for a truly fair battle. During this first great battle at Mag Tuired, Nuada lost an arm in combat with the Fir Bolg champion Sreng. Nuada's ally, Aengaba of Norway, then fought Sreng, sustaining a mortal wound, while the Dagda protected Nuada. Fifty of the Dagda's soldiers carried Nuada from the field. The Tuatha Dé gained the upper hand in the battle, but Sreng later returned to challenge Nuada to single combat. Nuada accepted, on the condition that Sreng fought with one arm tied up. Sreng refused, but by this point the battle was won and the Fir Bolg all but vanquished. The Tuatha Dé then decided to offer Sreng one quarter of Ireland for his people instead of the one half offered before the battle, and he chose Connacht.


Dianchecht, the druid physician of the Tuatha De Danaan, prepared a bath of magical herbs with such curative properties that the wounded who were plunged into it were made whole. However, the bath could not cure the king. Having lost his arm, Nuada was no longer eligible for kingship due to the Tuatha Dé tradition that their king must be physically perfect, and he was replaced as king by Bres, a half- Fomorian prince renowned for his beauty and intellect. The Fomorians were mythological enemies of the people of Ireland, often equated with the mythological "opposing force" such as the Greek Titans to the  Olympians, and during Bres's reign they imposed great tribute on the Tuatha Dé, who became disgruntled with their new king's oppressive rule and lack of hospitality. By this time Nuada had his lost arm replaced by a working silver by Dianchech and the wright Creidhne (and later with a new arm of flesh and blood by Dian Cecht's son Miach). Bres was removed from the kingship, having ruled for seven years, and Nuada was restored. He ruled for twenty more years.


Bres, aided by the Fomorian Balor of the Evil Eye, attempted to retake the kingship by force, and war and continued oppression followed. When the youthful and vigorous  Lugh joined Nuada's court, the king realised the multi-talented youth could lead the Tuatha Dé against the Fomorians, and stood down in his favour. The second Battle of Mag Tuired followed. Nuada was killed and beheaded in battle by Balor, but Lugh avenged him by killing Balor and led the Tuatha Dé to victory.


Nuada's great sword was one of the Four Treasures of the Tuatha Dé Danann, brought from one of their four great cities. 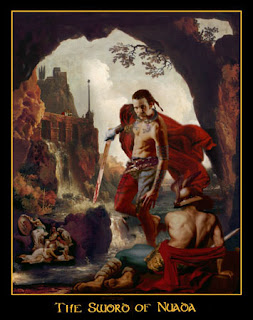 Nuada may be the same figure as Elcmar, and possibly Nechtan. Other characters of the same name include the later High Kings Nuadu Finn Fail and Nuadu Necht, and Nuada, the maternal grandfather of Fionn mac Cumhaill. A rival to Conn of the Hundred Battles was Mug Nuadat ("Nuada's Slave"). The Delbhna,  a people of early Ireland, had a branch called the Delbhna Nuadat who lived in County Roscommon. The present day town of Maynooth in County Kildare is named after Nuada (its Irish name is Maigh Nuad, meaning the throne of Nuada).

Nuada is no doubt related to the Romano-British god Mars Nodens, and the Welsh figure Lludd Silver-Hand, also known as Nudd. He may also be related to the Irish figure Neit, who is also said to be a war god, and married to Nemhain. Nuada's wife is usually one of the three Machas.