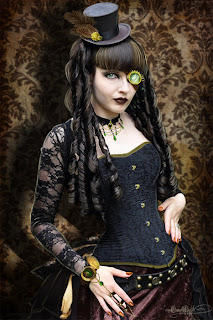 I am a little bit in love with Steampunk.

I stumbled across the culture a while back and loved it instantly.

Then last week on the Castle TV show he went to a Steampunk themed bar!

So what is Steampunk?

Steampunk is a retro-futuristic genre of art,costuming and literature set in a world where steam power is still commonly used, a world frequently shaped by other alternate history elements, such as highly-functional dirigibles being used in place of airplanes, or analog computers being developed as early as the 19th century, or different outcomes to actual historical events. Steampunk tends to bear the cultural trappings of the Victorian and Edwardian eras, and is often characterized by the desire to make fashion and the objects that surround us more unique, more artfully designed, which results in a Do-It-Yourself attitude and creations. The "-punk" suffix in Steampunk tends to lead its devoted enthusiasts to a greater deviation from traditional Victorian and Edwardian social mores than the Neo-Victorian sub genre of retro-futurism (although they are frequently mistaken for each other).

Steampunk has always been first and foremost a literary genre, or least a subgenre of science fiction and fantasy that includes social or technological aspects of the 19th century (the steam) usually with some deconstruction of, reimagining of, or rebellion against parts of it (the punk). Unfortunately, it is a poorly defined subgenre, with plenty of disagreement about what is and is not included. For example, steampunk stories may:
Take place in the Victorian era but include advanced machines based on 19th century technology (e.g. The Difference Engine by William Gibson and Bruce Sterling);

Include the supernatural as well (e.g. The Parasol Protectorate by Gail Carriger);

Include the supernatural and forego the technology (e.g. The Anubis Gates by Tim Powers, one of the works that inspired the term ‘steampunk’);

Include the advanced machines, but take place later than the Victorian period, thereby assuming that the predomination by electricity and petroleum never happens (e.g. The Peshawar Lancers by S. M. Stirling); or

Take place in an another world altogether, but featuring Victorian-like technology (e.g. Mainspring by Jay Lake). 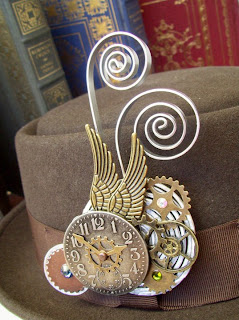 There are probably plenty of other combinations I’ve forgotten, but that’s steampunk as a genre in a nutshell. Steampunk has also cross-pollinated its way into other genres, so there is steampunk romance, steampunk erotica, and steampunk young adult fiction. I haven’t spotten any steampunk picture books yet, but I won’t be surprise when I do.
And it isn’t just written fiction anymore. There are steampunk games (e.g. Bioshock II), steampunk graphic novels (e.g. League of Extraordinary Gentlemen), and even steampunk movies (e.g. Sherlock Holmes) and TV shows (e.g. Warehouse 13). There is even steampunk music and steampunk performance art.
But steampunk has become a lot more. What with all the cool contraptions in the stories, it was only natural that some people would decide to make some of them (or at least things like them). Thus, steampunk gadgets came into the real world. People has “steampunk’d” everything from computers, desks, telephone, watches and guitars to cars, motorcycles, and whole houses. These objects can vary from a grungy look of a forgotten antique to the shiny overwrought newness of a Victorian gentleman’s club. Think brass and copper, glass and polished wood, engraving and etching, and details for the sake of details. So, steampunk is also a design aesthetic. 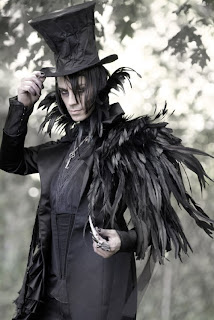 This aesthetic carries over into personal style with both clothing and jewelry being made in a “steampunk” style. The clothes are not exactly Victorian, adding in technological bits or hints of a more adventurous life than a typical Victorian citizen likely enjoyed.


So, steampunk is a genre and a design aesthetic.


But wait, there’s more! Steampunk has a philosophical angle as well, which is somewhat of a combination between the maker ideals of creativity and self-reliance and the Victorian optimistic view of the future. This last bit has led to accusations that steampunk includes a fair amount of empire worship, which is a reasonable concern. Another criticism has been that steampunk focuses on the best of the past and quietly sweeps the bad (i.e. slavery, child labor, widespread disease, etc.). Again, this may be a valid criticism and it is somethat that steampunk will have to address.
Personally I love it, the jewellery the costumes, the whole idea.