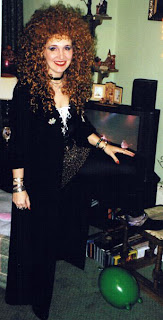 This week my husband’s band is celebrating 25 years.   Hubby is the only original member that has been in the band since the beginning, but the band has had some long term members over the years which is unusual for a rock band!  They are celebrating with a gig that will include all the line ups from the entire 25 years and even a line up from the original band that theirs evolved from.
So today has been spent with lots of reminiscing and looking out old photographs.  Lots of photos from the mid 80’s that involved lots of back combed hair and spandex trousers.
Hubby and I have been together for 19 of those years so I know most of the band members quite well.  For about ten of those years the band and all the wives were very close, like one big family.  In fact at one point five of the wives were pregnant all at the same time! ;-)  We went everywhere together, we went to all the gigs, we partied, we even spent all of our free time together socialising.
Twice a year we all piled down to HOG rallies for the weekend, I don’t think we stopped laughing from the minute we arrived to the minute we left. Usually involving some fancy dress theme or other, which seemed to involve a lot of the men always dressing as women…
Good times, very good times and I am thankful for them all.
But, as these things do, it all ran its course and we have drifted off into our own separate lives.  Only crossing paths on the odd occasion (in the local rock band world you tend to know everyone!).   Life changes, people change and everything moves forward.
Today was spent looking back over very happy memories.
Tansy
x
The band - The Mafia rock band
Posted by Unknown at 17:25