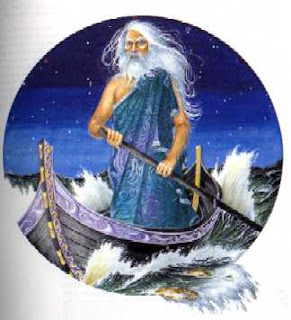 I have long known the name of Mananna mac Lir, but have seen his name a few times recently, so was inspired to research him:-

Irish god of the sea, ruler of the Otherworld, and keeper of the magic tools the the Tuatha Dé Danann. His Welsh counterpart is Manawyddan fab Llyr.


"Sea-horses glisten in summer
As far as Bran has stretched his glance:
Rivers pour forth a stream of honey
In the land of Manannán son of Lír."
--"The Voyage of Bran"--
No one has successfully come up with an etymology for the name "Manannán" but only that it means "Him from the Isle of Man." Either the god is named for the Isle of Man, or vice versa. However, his surname of "mac Lir" indicates that he is the Son of the Sea (or of Ler, god of the sea).

Manannán is a lord of the Otherworld, residing at Emhain Abhlach, the Plain of Apples, a paradise. Here, he raises Lugh Lamhfada in fosterage, and brings Cormac Mac Airt in order to give him the cup of sovereignty over all Ireland.

Manannán has a spear named Crann Buide. He also has a magic crane bag, which is bottomless, containing the following items: the shirt, knife and house of Manannán; the smith's hook and belt of Goibniu; the shears of the king of Scotland; the helmet of the king of Lochlann (probably Scandinavia); a belt of fish-skin and the bones of the pig of Asal. There is also his flying ship named Scuabtuinne ("the Sweeper of the Waves"); a sword named Fragarach ("The Answerer"), and a horse named Aonbharr ("One Mane").

His wife is Fand, who fell in love with Cuchulainn, which lead to Manannán shaking his cloak of forgetfulness between them. His first daughter is Niamh of the Golden Hair, who brought Oisin to Tir na nOg; his second is named Cliodna, and a later son named Mongan. He is also credited with two more daughters Aife, Aine, and a son Ilbreac. When the Tuatha Dé Danann were driven underground by the Milesians, it was Manannán who divided up the underworld into specific regions for them. The reason is that Manannán is not one of the Tuatha Dé Danann, but seems to have existed before them, and rarely visits Ireland itself, but lives instead on his own plane, or is associated with the Isle of Man. It is possible that he was an indigenous god who was incorporated into the pantheon. 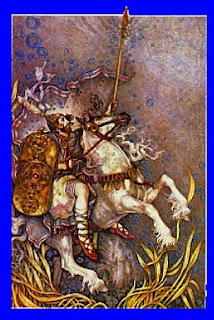 It is Manannán who rules over the Blessed Isles of the Otherworld--Tír na mBean (the land of women), Tìr fo Thonn (the land beneath the wave), Tìr Tairnigir (the land of promise), Tír na nOg (the land of youth), Magh Mell (an afterlive paradise), and Emhain Abhlach. It was he who led Bran mac Febral on his voyage; he is described as riding a chariot on the waves as a man would ride a chariot over grass.

The Book of Invasions says that there were two Manannáns: the son of Ler, and "Orbsen [son of Elloth (Allot) which] was the name of Manannán at first, and from him is named Loch Orbsen in Connachta. When Manannán was being buried, it is then the lake burst over the land, {through the burial}." He's attributed one son named Galia. What is worth noting is that when this second Manannán is buried, his grave bursts into a lake, betraying his true nature as a sea deity. Later historians try to make him a sea trader.

The waves are called Manannán's horses, which brings up an interesting point first, that his Welsh counterpart Manawyddan fab Llyr becomes the husband of the horse goddess Rhiannon, and second, that the linking of horse and sea are also seen in Greek mythology, with the creation of the horse attributed to Posedion.

His symbol is the triskelion of Man, the three legs in a sunwheel, representing the legs of Manannan as he strides across the waves.