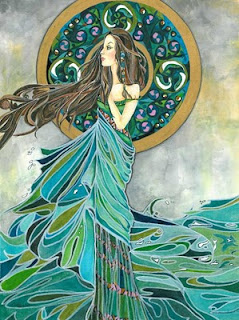 Those of you that know me will also know that my matron Goddess is The Cailleach.  But she is starting to fade for me at this time of the year as she always does, as she is a Winter Goddess.  She is still there but very faint.  I spoke with her last night and she suggested I work with another Goddess through the summer months, the name she provided to me was Aine.

I had heard of Aine, but didn't know a huge amount about her.  On researching I realised that, as usual The Cailleach had guided me well.  So many things about Aine seemed to fit, I am very much looking forward to this part of my journey with her.

One of the most beautiful, feminine, and powerful Celtic goddesses was the goddess of love, light, and fertility Aine. She is one of the many goddesses that the Christian monks sought to do away with, mostly because of her many relations with men. Because of this Aine is not heard much of in the bardic literature, but she is still very prominent in the folk-lore of the neighborhood. She is known in some parts of Ireland as the Fairy Queen of Munster.

Aine's name comes from the word 'an', meaning bright'. She is considered one of the sdhe (pronounced shee) and more formally known as the Leanan Sidhe (Sweetheart of the Sidhe). She is also called Ain Cli, Ain Cliach, Ain of the light, Aine N'Chliar, and Ain Cliar, the Bright. Her name has been pronounced as [awn-ya], [aw-nu] and [aw-nay].

Her home is in the hills of Cnoc Aine near an enchanted lake. In County Limerick there is a stone circle dedicated to her called The Grange'. She is often linked with Anu, Danu, Brigid and the Morrigan. It is also possible that Aine and another goddess, Grainne, alternated positions for the waning and waxing solar year, changing places at the solstices.

As is often the case with gods and goddesses, Aine is the subject of some controversy regarding her lineage. Some believe she was the daughter of King Egobagal. Some believe that she was in fact the daughter of the dark sea god, Manannan Mac Lir. The most common theories are that she is the foster-daughter of Egobagal, king of the Tuatha de Danann, and the daughter of Manannan. Aine's sister was Finnen or Fenne or Fennel, named the same as the sacred herb which wards off evil spirits, bestows strength, courage, and prolongs life. She also had another sister named Miluchrach.

Aine rules agriculture, fertility, crops, and cattle. She is in several tales strongly associated with the Yew tree which shows her as a Goddess of Life and Death. In the Ogham, the Yew is said to be tied to her and her aspects. She is also associated with one of the sacred herbs of Druids, meadow-sweet.

Like many goddesses, Aine had different aspects to her personality and was associated with several different things. She was connected to both the sun and the moon at different times in her life though now she is known primarily as a moon deity from her connection to the Faefolk. It is said that she even sometimes took animal form, as a red mare (Lair Derg) that no one could outrun, in order to walk among her people. 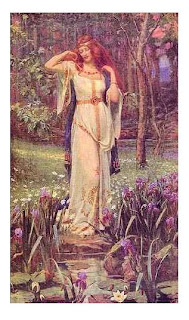 Aine can be seen in a triple aspect by the powers attributed to her. Firstly, as the Maiden, in her ability to reward her devotees with the gift of poetry or with unfortunate madness. There was a stone, Cathair Aine that belonged to her and if anyone sat on the stone, depending on whether they had offended her or not, they could be in danger of losing their wits, sit there three times and they would lose them forever. Aine was very revengeful, and it was not a safe thing to offend her. Also, it was said that all the mad dogs in Ireland would congregate around this stone. It is not hard with her connection with poetry and hounds to see her Maiden aspects to be those of the Goddess Bride, who in the form of a Maiden was the muse of poetry and had the name Cu Gorm (grey hound).

Next, as a Mother deity Aine is associated with lakes and wells with great powers of healing. Tobar-Na-Aine (Well of Aine) was credited with life-restoring powers. Also, in the Irish legends we find in her son Earl an archetype of Lancelot in the later Arthurian legends, while Aine Herself is the Lady of the Lake.

In all her aspects it is clearly shown that Aine was no deity to offend, for in spite of all her beneficent attributes, if crossed she could have coined the phrase "Hell hath no fury like a woman scorned". There are many tales of her revenge and her infinite patience in its pursuit.

The attribute of Aine which made her a great enemy of the early Church was undoubtedly her sexuality. If ever a Goddess was depicted as the Arch Rival of the institute of matrimony then it was surely Aine, whose promiscuity and freedom of spirit could not be encompassed by man, thus a threat to the self denial of chastity of these womanless monks.

Finally, in her third aspect of the dark Goddess, she has the ability to appear to mortal men as a woman of great beauty known as the leannan sdhe, which means "Fairy Lover". In this form her chosen subject would be totally spellbound into what could only be described as a fatal attraction, as the outcome was almost certain to result in the death of the chosen one.

There are many stories associated with Aine and her various escapades. Aine liked humans and often mated with men, producing faery children. She possesses a magical ring that can reveal faeries. In the tale Cath Maige Mucrama (Battle of Mag Mucrama), her father was Egabal, whom Ailill Aulomm (son of Egan Mr) killed. Ailill then abused her, and she conceived Egan. Eogan later became the king of Munster, and was the founder of the famous dynasty - the Eganacht. She used her magick to kill Aillil Olom, the King of Munster, after he committed his offense against her.

In one story she was offended by an Irish High King whereupon she caused a great battle to ensue in which he was killed. It was said that at his death her mocking laughter could be heard over the din of battle. Many believe that the goddess actually married one of her human lovers Gerald, the Earl of Desmond. However, there is much disagreement about how the marriage came about. One says Gerald came across her bathing in a river and fell in love with her at first site. He stole her cloak and refused to return it until she agreed to marry him. In another version he found Aine combing her hair beside the river, and used her own cloak to capture her.

In yet another version, Aine enchanted the Earl, who then married her. In any case, they had a son, Geroid Iarla, Earl Fitzgerald, who was called The Magician (some theorize that this might be Merlin). Gerald who was under a taboo to never show that he was surprised by anything their son did, but he broke his taboo by exclaiming loudly when Geroid jumped in and out of a bottle. The Magician then turned into a wild goose, and flew away. Disgusted with her human husband, Aine disappeared into Knock Aine. Geroid is said to live beneath a lake, but will return one day to expel all foreigners from Ireland. Others say that Geroid rides forth every seven years, as a phantom upon a spectral white horse that is shod in silver shoes. Many of the aristocratic families of Munster claimed descent from this union.
At the bidding of her son, Earl Geroid, she planted all Knockainey with Pease in a single night. She was, and is, worshipped on Midsummer Eve. Those who honour her carry torches of hay and straw, tied on poles and lighted, round her hill at night. Afterwards they dispersed themselves among their cultivated fields and pastures, waving the torches over the crops and the cattle to bring luck and increase for the following year. Wisps of straw are burned in her honour on St. John's Eve.

She once made a magickal vow to never sleep with a gray-haired man. Aine kept this vow even after her jealous sister Miluchrach used enchantment to turn her beloved Fionnis hair that color. She escaped the trap by plucking the hair out of Fionnis' hair before sleeping with him. Breaking an oath, especially when Aine is involved, can get you into a whole lot of trouble. Aine is a great protector of women and especially her devotees. When called upon for their behalf, Aine is a force to be reckoned with. Do not anger her if it can be avoided.

Invoke Aine for love spells, fertility, faery magick, abundance, prosperity, punishing love crimes, keeping magickal vows, revealing faeries, bearing magickal children, and leaving unsuitable mates. The Sun and Moon are her planets, South West is her direction, and Air is her element. The red mare, rabbit, and swan are her sacred animals. The first Friday, Saturday, and Sunday after Lughnassagh are also her sacred days.

Images: Jessica Galbreth & Caroline Evans
Sourced from various sites on the net including helium.com & shee-eire.com
Posted by Unknown at 09:45